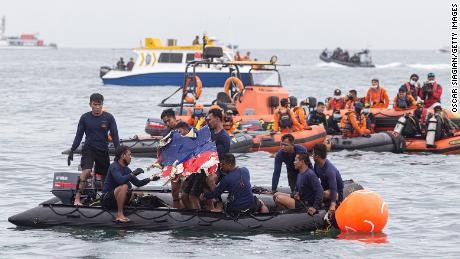 A passenger jet carrying more than 60 people crashed into the Java Sea on Saturday, minutes after taking off from the Indonesian capital, Jakarta, Indonesian officials said, bringing renewed attention to a nation long cursed by aviation disasters.

The fate of the plane, a Boeing 737-500, also carried the potential to ensnare the troubled American aviation giant in more bad publicity, even though the cause of the crash had yet to be determined.

Indonesia’s Transportation Ministry said that the last contact with the plane, Sriwijaya Air Flight 182, was at 2:40 p.m. local time. The plane was bound for the city of Pontianak on the island of Borneo.

It had 62 people aboard, according to the Transportation Ministry. Four minutes after taking off amid a heavy monsoon season rain, following a bad weather delay, the 26-year-old plane lost more than 10,000 feet in altitude in less than 60 seconds, according to Flightradar24.

On Sunday morning, the Jakarta police said that body parts and some clothes from the passengers had been found in waters just northwest of the Indonesian capital. The Indonesian National Search and Rescue Agency also said it had found pieces of debris believed to be from the plane’s wreckage. The area where the remains and debris were discovered is known as the Thousand Islands.