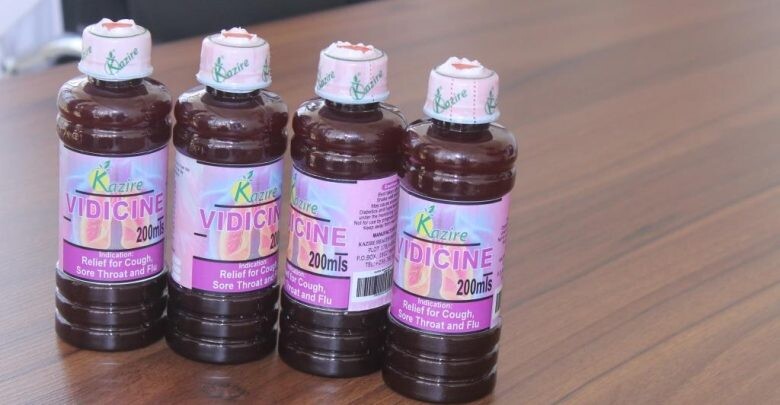 MBARARA, UGANDA: The National Drug Authority (NDA) has approved the use of Vidicine, a local herbal concoction as a supplementary treatment of Covid-19, the Daily Express reports.

While addressing journalists at the NSSF building in Mbarara Wednesday, Edward Kazire, the renowned proprietor of Kazire Health Products Limited said the approval comes after various assessments and inspections of the factory manufacturing facility in Lugazi Mbarara.

“One year ago, we started on this battle of Covid-19 management when the country was in a big panic as you are well aware that we had fewer support machines in most of our health facilities

He says through Chinese experts, the Kazire Health Products Limited scientific team was able to first study the virus movements to embark on research and manufacturing the drug to deal with the virus

“Tonight, I would like to inform Ugandans and the world of science, that the journey of finding this solution is taking shape. We registered a landmark step on the 16th of August 2021 when National Drug Authority notified our herbal medicine under the brand name Kazire Vidicine. This notification permits that, our drug can now be manufactured at large scale and be sold in all registered and accredited pharmacies, and drug shops across the country”. He added

Unlike Covidex, Vidicine is a complementary treatment drug in the management of COVID-19 symptoms.

“It is to stop inflammation to protect the lungs and keep oxygen levels up so that there is less risk for you to need ICUs which are limited. It also protects the organs and control the viral replication until when one turns negative” says Kazire.

He thanked the Mbarara University of science and technology where studies, standardization, and identification of molecules were conducted.

According to Track Atuhaire, the research Assistant at Kazire health products Ltd, Vidicine was used to treat more than 290 Covid19 patients in districts of Mbarara, Kampala Sheema, Ntungamo, and Rukungiri before being approved by NDA officials.

“We treated more than 290 Covid-19 patients on their home care. Supplemented with this product, none of them went for oxygen so that is one major land mark that we know we have achieved” says Sedrack

“We have already injected in around 370million in this research. it was only possible because we were working in partnership with Mbarara University of science and technology that’s why the cost became so low but if you are to do it as an independent researcher you can’t manage

Each bottle of syrup Vidicine goes for Ugx 10000 in pharmacies and drug shops which is relatively cheaper compared to ICU fees in Uganda.

“Because we want it affordable for the people it shouldn’t cost more than oxygen. If it costs more than a unit of oxygen then we will not have provided” says Kazire.

He also asked Government to work with international investors who have already succeeded in vaccine production.

“One focal thing the government should do is to have our own vaccine plant, a dry lab is needed at the university we delayed because we never had great computers which are so fast to do the molecule docking and with strong equipment for bio-informatics,” says Kazire

NDA declined the herbal medicine to covid19 drug but a relief to cough, sore throat, and flue.

“The product has been formulated from herbal plants that have been traditionally used to alleviate symptoms of several diseases,” says Rwamwiri national drug spokesperson who stressed that the medicine does not cure Covid-19 but it can supplement the medicine being used by medics to treat Covid-19 patients.

But NDA has advised the manufacturer to conduct clinical trials which are the highest level of evidence to ascertain any claims of treatment.

Kazire Health Products has been all along in the journey of improving the health of people by providing healthy drinks for the last 26 years.

Despite the invasion of Covid19 compliment, Kazire still encouraged Ugandans to maintain the SOPs that include; wearing masks, sanitizing, and social distancing.

“While in America people are now rioting that they no longer want to put on masks, Uganda is tending towards the third wave and this is more likely to be terrible than the 2nd wave. But use of masks, washing of hands and social distancing is scientific and if we follow all these procedures, I am very sure that we shall win this battle” says Kazire