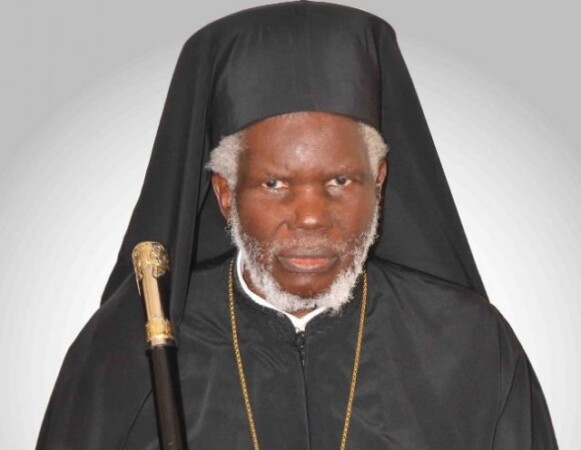 EXCLUSIVE: On Sunday evening, September 5th, the Orthodox Church of Uganda announced the death of His Eminence Metropolitan Yonah Lwanga who died at the age of 76.

Yonah Lwanga’s death comes barely a year since the Catholic Church Archbishop, the Late Cyprian Kizito Lwanga succumbed to a blood clot according to the postmortem report.

But who is Yonah Lwanga? Here is his profile, background, and biography as the Orthodox Church Head.

His Eminence, the Most Reverend Jonah (Lwanga) served as the Archbishop of Kampala and Exarch of All Uganda for 24 years since his ordination in 1997. His Eminence is credited with the establishment of the suffragan see of Gulu under his omophorion.

Archbishop Yonah Lwanga was born in rural Degeya, British Protectorate of Uganda in 1945 to an Orthodox family. Obadiah Kabanda Basajakitalo his grandfather was a Father in the Orthodox church, and thus Lwanga grew surrounded by the missionary efforts of the first Orthodox Ugandans.

From 1952 to 1964, Jonah Lwanga completed his general education in Bulemezi and Kyadondo, Uganda and then departed that year to study at the Ecclesiastical School of Crete, until 1968.

In 1979, Jonah Lwanga headed back to Uganda, serving as secretary of the Ugandan Mission under Archbishop Frumentios (Nasios) (1972–1981) of the Archdiocese of Irinoupolis until 1981. On May 1, 1981, he was ordained to the diaconate.

In October His Beatitude Anastasios (Yannoulatos), then Bishop of Androusa (1972–1991), arrived in Kenya in order to become Vicar for East Africa, following the repose of Archbishop Frumentios. The East African Mission grew substantially during his tenure because it was one of the few occasions in Church History that a hierarch from a certain Synod (the Church of Greece) ruled another Synod’s (the Patriarchate of Alexandria) jurisdiction during its vacancy.

His Beatitude ordained Deacon Jonah to the Holy Priesthood in 1982. In the same year, as Professor of Theology, he was sent to the Ecclesiastical School of Makarios III in Riruta, Nairobi, which had been inaugurated in the previous year. During this time, he was elevated to Archimandrite.

As an Archimandrite, Jonah Lwanga worked together with Professor Andreas Tillyrides, current Archbishop of Nairobi, who helped establish the seminary since 1977. One was the counterpart of the other: Professor Andreas was a Greek missionary, layman and pupil of His Eminence Kallistos (Ware) of Dioclea in Oxford University; while Professor Jonah was an Ugandan native, consecrated clergyman and studied with the great ecclesiastical teachers of Athens.

The Holy Synod on July 26, 1992, elected Archimandrite Jonah Lwanga to become the titular Bishop of Bukoba, while Makarios was made Bishop of Riruta on the previous day. One of His Grace’s first decisions in Tanzania was joining the Syndesmos Orthodox Youth Movement together with Bishop Makarios.

Bishop Lwanga has always stressed the participation of children in the Church, as he was raised in the Church in his youth. Because of this, today East Africa has the largest Orthodox population of Africa.

In 1997, the Holy Synod elevated Bishop Jonah Lwanga to become the Archbishop of Kampala and Exarch of All Uganda succeeding Archbishop Theodoros (Nankyama) on the see of Kampala, honoring his legacy and expanding the Orthodox Faith in Uganda.

Under Archbishop Jonah Lwanga, over twenty medical facilities and a hospital have been established in Uganda, as well as an Orthodox Mother’s Union to address issues of spiritual and social development of women and their children and to fight against poverty, hunger and illiteracy. The union administers over sixty Orthodox communities in Uganda. Schools for children have also been built, including Orthodox classes on Sundays. Its children serve in the Church with minor orders. He also established a female monastery dedicated to Saint Catherine of Alexandria in Uganda. (see map)

Archbishop Jonah Lwanga has been actively speaking out against corruption in his country and always encouraged his priests to do so.

On November 26, 2018, thanks to His Eminence’s efforts, the Holy Synod of Alexandria under His Beatitude Theodoros II established the Diocese of Gulu for the Eastern and Northern Ugandan Mission under Archbishop Jonah’s omophorion.