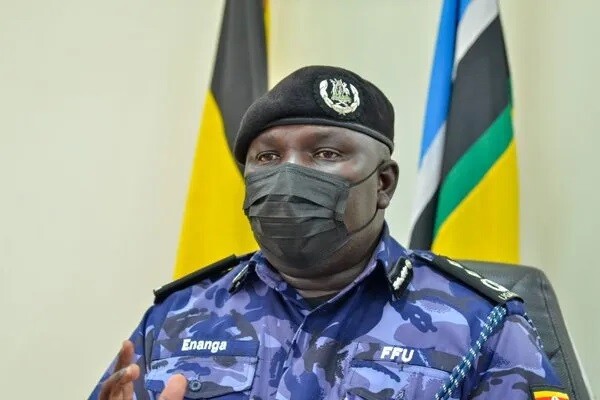 KAMPALA, UGANDA: The security agencies have implicated petroleum and real estate companies in the laundering of over Shs1.8b to bankroll the activities of Allied Democratic Forces (ADF), a terrorist group, in the country.

Although the police didn’t name the petroleum firms and real estate dealers, they provided particulars of two suspects already taken into custody over the alleged criminal dealings.

The revelations follow explosions of two Improvised Explosive Devices (IEDs), at a pork restaurant in Kampala’s Kawempe Division and on a moving bus in Mpigi along Kampala-Masaka highway on Saturday and Monday, respectively.

President Museveni, the commander-in-chief, linked both attacks to a sleeper cell of the Ugandan-born ADF, which has assumed the name Islamic State Central Africa Province or ISCAP since becoming an ISIS affiliate in 2018.

Police promptly classified the Saturday night blast in Komamboga as “an act of domestic terrorism”, but said there was no evidence connecting it to ADF despite ISCAP claiming responsibility.
Yesterday, however, police in a fairly lengthy statement put names to alleged crimes, specified cash flows involved and how it exchanged hands to finance ADF operations.

Police spokesman Fred Enanga said they had arrested two suspects, one man and a woman whose names we are withholding pending their arraignment in court.
“…[they] have so far received $114,000 (Shs406m) and distributed it to their recipients on behalf of the ADF. One of the recipients …who received money to facilitate acts of terrorism, was arrested on the October 25 from Hoima District,” he said.
This is the biggest amount of money known to have been sent to finance ADF operations, according to investigators. Reports by the United Nations experts on eastern Democratic Republic of Congo insurgence often find funding transactions to ADF that are lower than Shs1m.
Mr Enanga yesterday said the funding has also been channelled through selected petroleum companies and real estate dealers.

“About $400,000 (Shs1.4b) found its way through the petroleum companies,” Mr Enanga said.
He, however, did not disclose the source of the large sum of money or how it moved into the country despite tightened cash inflow rules.
In interviews for this newspaper’s lead story yesterday, highly-placed security and intelligence sources intimated that financing for ADF operations are funnelled by agents and sympathisers in South Africa, Kenya and Uganda.
The money is either delivered in dollar bills or wired digitally to DRC where tracking of terrorism financing in less strict than in Uganda.

In Uganda, tighter rules on terrorism financing under the Anti-Money Laundering Act, 2013, make it difficult to receive into the country in excess of Shs10m either through money transfer services or inter-bank transfers without questions, if not prohibition.
The penalty for terrorism financing, if convicted, includes freezing of bank accounts and seizure of property amassed through such criminal enterprise.
In strident comments, President Museveni yesterday said ADF, in the two rudimentary attacks, was involved in “shallow efforts” at urban terrorism, but they will be defeated as its subversive activities was ended in 2007 in Semliki National Game Park.

“We shall get all of them.  The breakthrough followed the attack on [Gen Edward Wamala] Katumba.  That is when full accountability for the ADF criminals irreversibly started and their impunity ended in the phase of urban terrorism.  The present shallow effort is easy to defeat,” he noted in messages circulated to newsrooms and put on twitter.
Unknown masked gunmen ambushed Works Minister Katumba, a former chief of defence forces and Uganda police commander, in broad day in June in Kampala and killed his daughter and driver.

The ambush triggered a massive security swoop and nearly 10 suspects, alleged to be ADF members, have since then been variously shot dead in operations in different parts of the country. A number were arrested, charged in court and remanded, but not before they displayed what they said where marks of torture while in incarceration.
Gen Museveni yesterday said the arrest of the Katumba shooting suspects helped security and intelligence agencies to bust the ADF cell or put some of its members out of action.
In July 2021, security agencies shot dead three suspects, who had been arrested in relation to the killing of Brenda Nantongo and Haruna Kayondo, Katumba’s daughter and driver, respectively.

Another suspect alleged to have planned to bomb mourners at the burial of then deputy Inspector General of Police Paul Lokech, was arrested in a hotel in Pader District and President Museveni, without providing specifics, said he had been taken to court.
Three weeks ago, security agents shot dead a man, Hamid Nsubuga, 25, alias Young Midu, in Kampala suburb. They said they believed he was an ADF member plotting to assassinate an unnamed local politician. Nsubuga is said to have escaped in Pader during a raid by the Chieftaincy of Military Intelligence in August this year.

Police yesterday said that Isaac Matovu, alias Mazafalu, who died in the explosion of the IED that he was carrying on the bus on Monday, was part of the terrorist cell that planned an attack at Lt Gen Lokech’s burial.
Security agencies claims that all the killed suspects resisted arrest or attempted to escape.
More than 30 people suspected to be members of ADF or collaborators are in detention.
The Director General for the Internal Security Organisation, Col Charles Oluka, said during his visit to Eastern Africa Fusion and Liaison Unit in Entebbe yesterday, he was briefed that Uganda’s security and intelligence outfits have foiled 47 terror attacks, but did not give the period.

Uganda suffered the last major terrorist attack in 2010 in which more than 70 people perished. Somalia’s radical group, al-Shabaab, claimed responsibility.
In yesterday’s comment, Col Oluka said: “You (Eastern Africa Fusion and Liaison Unit) have contributed a lot for what we have done to safeguard the people of our countries particularly here in Uganda. There would have been bombs all over the place, but the public doesn’t know. They only know that (bomb) which has gone off. They don’t know about the 47 that we have stopped from going off.”

Eastern Africa Fusion and Liaison Unit is a regional intelligence sharing mechanism of 10 countries and its members were yesterday meeting in Entebbe.
Col Oluka said there is need for the countries in the region to strengthen sharing of intelligence on terrorism, especially in the eastern DRC where ADF or ISCAP, as it is alternately called, is based.
He said the regional body is working on an intelligence research about al-Shabaab and ADF insurgents and the study will be of help to Uganda’s fight against terrorism and violent extremism.