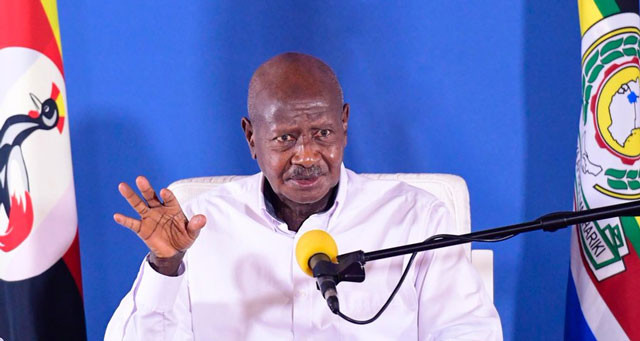 KAMPALA, UGANDA: President Yoweri Museveni Thursday announced that schools and the rest of the Ugandan economy will fully reopen in January 2022 clinging on the rate of covid-19 vaccination in the country.

While delivering his Thursday presidential address aired live on all Radios and TVs, Mr. Museveni said that by the end of December 2021, the government will have received about 23 million doses of Covid-19 vaccines which are able to vaccinate more than 12 million Ugandans (both getting two complete doses) which will facilitate the full opening of the economy.

This figure, the president says, should hold at least 4.8 million frontline workers and vulnerable categories of people including bar attendants.

“If this is done, we shall be able to open schools and the rest of the economy by January 2022. But whether people go for vaccination or not, we shall still reopen the economy. If anything goes wrong, the moral responsibility is yours,” the president said.

Mr. Museveni urged the CAOs, sub-country chiefs, Gisos, and all other leaders to try to sensitise the locals about the benefits of being immunized against Covid-19.

On the issue of attacks by bombing that have claimed the lives of two people and injured others, Mr Museveni assured the public that neither rural-based insurgency nor urban terrorism will defy the government’s capacity.

“Although we had some success in fighting terrorism, I realised that there were gaps in the policing capacity of the country. There was the infiltration of police by criminal elements that colluded with criminals, laxity, and a serious deficit of technology capacity to fight crime. But I would like to assure the public that neither rural-based insurgency nor urban terrorism will defy our capacity,” he said.

The address comes at the time when the country is under tension after two bombs went off in a space of two days. The President has been using his Twitter handle to condemn the attacks, saying those behind them will be arrested.

He also hinted at the need to deal with is bail to eliminate these kinds of criminals from society. “We the freedom fighters have never supported bail for murderers, defilers, and rapists,” Mr Museveni said.