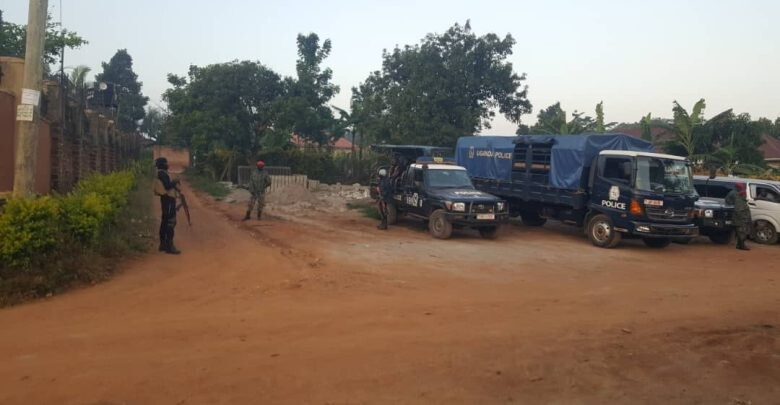 KAMPALA, UGANDA: Military Police has deployed heavily at the residence of National Unity Platform (NUP) leader, Bobi Wine in Magere, Wakiso district ahead of his planned visit to Kayunga to converse votes for NUP’s Harriet Nakwedde in the district By-Elections.

The heavily-armed security personnel according to this reporter have blocked access routes to the former presidential candidate’s home with barricades and military trucks deployed all over block motorists from accessing any possible route to his residence.

According to the NUP Secretary-General David Lewis Lubongoya, Bobi’s home was “surrounded by the police and military to block him from going to Kayunga” where he was expected to campaign for the NUP candidate in the by-election for LC5 chairperson.

Bobi Wine also took to his socials to confirm the deployment of security at his home saying; “This morning, ahead of my planned visit to Kayunga District to campaign for our flag bearer, the police and military deployed overnight around my home in an apparent attempt to block me from leaving.”

“The cowardly regime is on its way out. A matter of time,” Bobi added.

However, during a press briefing yesterday, Police spokesperson Fred Enanga said Bobi Wine was free to travel to Kayunga but that rallies would not be tolerated to prevent spread of COVID-19.

“No one has blocked Bobi Wine from campaigning for his candidate in Kayunga, but the Electoral Commission issued guidelines banning processions and observance of protocols against Covid,” said Enanga.

The Kayunga district LC5 by-election which takes place this Thursday, 16th December attracted six candidates with tight contest between NRM’s Andrew Muwonge and NUP’s Harriet Nakwede. Other contestants in the race are; Anthony Waddimba (DP), Boniface Bandikubi, Majid Nyanzi and Jamil Kamoga all independent candidates, the latter being the son of the former district chairperson, the late Ffeffeka Sserubogo.

Meanwhile, security has been tightened in Kayonza and Busaana sub-counties where President Museveni will be campaigning for Andrew Muwonge.
Armoured cars, anti-riot police personnel and teargas canisters rolled into Kayunga town this Tuesday morning ahead of the president’s arrival.