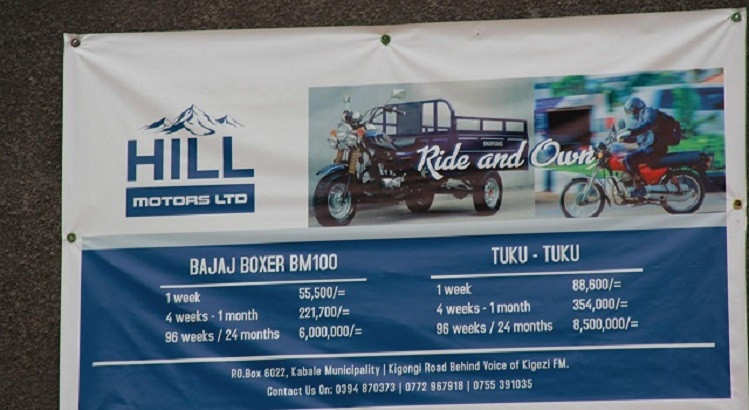 KABALE, UGANDA: Hundreds of boda boda riders in Kabale, Rukiga, Rubanda and Kisoro districts are in tears after losing their hard-earned money to Hill Motors Limited in a motorcycle loan scam.

Hill Motors Limited opened an office in Kigongi in the Central Division of Kabale municipality last month. The company invited riders to secure motorcycles on loan.

The company promised to deliver motorcycles and tricycles for the successful applicants on Wednesday afternoon during a mega launch to be attended by Godfrey Nyakahuma, the Kabale Resident District Commissioner.

However, the riders were shocked when they arrived at the company’s office and found it closed. They waited in vain for the workers to open. When they tried to consult neighbours, they were told that workers were seen parking and leaving around at 05:30am. The affected clients walked to Kabale central police station in shock to consult what to do.

Alex Niwagaba, the General Secretary of Kabale Boda Boda Association, says that the administration of Hill Motors Limited has been moving on different radio stations in Kabale town popularizing their business as genuine. Niwagaba says that the company has also been promising to deliver motorcycles to their clients once they make the deposit.

Ivan Mbabazi, one of the affected boda boda riders from Rubanda district says that one of the company employees he only identified as Reuben convinced him to join the scheme. Mbabazi faults Kabale municipality authorities for issuing a trading license to Hill Motors Limited without due diligence.

Abel Ruganza, the Kabale District Police Commander says that so far, more than 100 people have recorded complaints against the company at Kabale Central Police Station. Ruganza says that the police are doing everything possible to ensure that the suspects are arrested.

Boda boda riders attempted to vandalize the building where the company was renting but were calmed down by Ruganza and Reuben Mutabaazi, the Kabale District Internal Security Officer. This comes a month after hundreds of businessmen, religious leaders, teachers, and security officers in Kabale and Rubanda districts were fleeced by Bridge Water Stocks, an online cryptocurrency company.