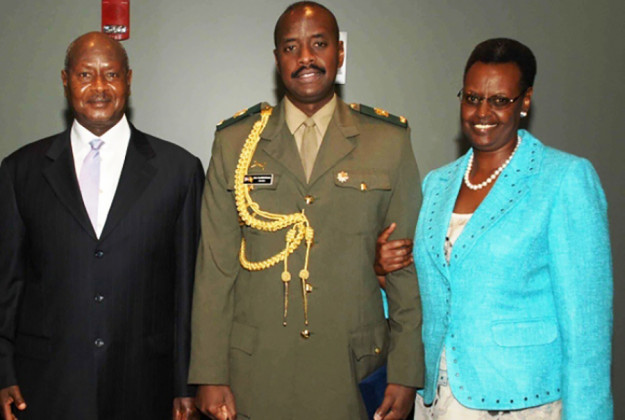 During its 48-year history, our nation has seen many leaders but none has been as openly corrupt and nepotistic as Museveni‘s not Idi Amin, Tito Okello and not Milton Obote.

The crowning moment of this journey was two weeks ago when President Yoweri Museveni appointed his wife, Mrs Janet Museveni, to cabinet. That there has not been a major outcry in the country against this increasing and narrowing patrimony is a sign of how deeply people’s expectations of the president have sunk.

Short of walking nude on the streets of Kampala, there is really nothing that Museveni can do that can shock anyone anymore. Whenever I think he has reached the rock-bottom of moral and political depravity, Museveni somehow still finds a new depth to fall into.

During its 48-year history, our nation has seen many leaders but none has been as openly corrupt and nepotistic as Museveni‘s not Idi Amin, Tito Okello and not Milton Obote. A cover story on one of our Indepedent edition shows the vast number of known relatives and in-laws of the president in government positions (see page 8) “ his son, brother, sister, daughter, brothers-in-law, sisters-in-law etc. Therefore, the appointment of his wife to cabinet is a small symbol of an otherwise large and chronic malaise that has been eating at our nation’s entrails. Museveni has been stripping away the difference between himself as a person and his official job as president.

For example, in 2006, I was told by a number of government officials that each time they went to see him at his country home in Rwakitura, Museveni would hold official meetings with them in his night gown. I was also informed that the special presidential assistant on veterinary services, Dr Sam Byagageire, literary works as the farm manager of Museveni’s ranches in Kisozi and Rwakitura. Equally, Presidential Guard Brigade soldiers guard and graze his cows.

These actions show that our president still behaves like African chiefs of old ‘ for example Nyungu ya Maawe of the 19th Century Nyamwezi kingdom ‘ by not separating personal from official business. Yet Museveni always criticises pre-colonial African chiefs for this ‘backwardness’ in his speeches on modernisation. The president needs to modernise himself first before thinking of modernising Uganda.

The president treats UPDF soldiers almost as if they are his children and many government officials as his servants. He also treats our nation’s treasury as his personal bank account by issuing orders to give free money to persons of his choice. Generally, he treats our country as his private estate ‘ witness how he gives out public land and public enterprises for free to ‘investors’ of his choice. These days he openly moves with brown envelops filled with cash which he dishes out at will to groups meeting him. The last Ugandan president to do that was Amin.

In such circumstances, what difference is there between the resources of our nation and the private wealth of the president? In many ways, we the citizens of the republic are not treated any differently from the porters on his farm ‘ or even his cows and goats. No wonder, most people cynically refer to Pay As You Earn (PAYE) tax as Pay As Yoweri Enjoys.

I understand that given his peasant upbringing in a nomadic culture, our president may not appreciate the difference between public resources and his personal wealth. Among his Bahima sub-ethnic group, when a friend visits, you bid them farewell by giving them a cow. When he gives public money or public land for free, Museveni is acting true to his Kihima peasant roots; just like a peasant in Nyabushozi would see off a friend with the words ‘Nakuha ente’ (I have given you a cow). Yet a Muhima peasant does not give away his/her cow without some criteria.

Thus to explain the irregular giving away of taxpayers’ money, Museveni has always advanced dubious reasons. In the case of Tri-Star Apparels factory in which he sank $13m before it collapsed under his nose, he claimed it was to break a ‘psychological inferiority complex’ of Ugandans exporting finished goods to America. Apparently, such a complex must have been his because by 1970, Uganda was a net supplier of finished garments to some of the world’s leading stores like Marx and Spencer, C&A and so on.

But the businessman he gave free taxpayers’ money to build the garment factory was not Ugandan. So, if the complex existed at all, using an Asian to export the goods to America was not a formula for removing such a ‘psychological inferiority complex’ among Ugandans. Most critically, he did not seem to realise that he caused huge financial loss to the government of Uganda, a crime under the law for which he has arrested other public officials like Jim Muhwezi and Mike Mukula.

The list of issues around which Museveni has personalised the state in Uganda is long and inexhaustible. The point, however, is that the appointment of his wife to cabinet is not unique or unusual as it falls into the pattern of his actions over time ‘ appointing family members to run the government ‘Â daughter, nephew, son, brother, sister etc. But how has our nation traversed from a republic to a dynastic kingdom akin to that of Louis XVI in France on the eve of the French Revolution of 1789? How did a revolution seeking modernity for Uganda turn into a corrupt neo-patrimonial order?

Here lays the tragedy of Africa. Though Museveni initially positioned himself as the leader seeking to change how Africa was managed, he has exposed himself as the ultimate symbol of our continent’s dysfunctions. Because of low levels of institutional development, decision making in our countries tends to be highly personalised; individual rulers tend to exercise a disproportionate influence on the fate or fortunes of a nation.

In such circumstances, the paranoia of an Idi Amin, Jean Bokasa and Samuel Doe can lay a country to ruins. Equally, the charisma, discipline and moral quality of a Kwame Nkrumah, Nelson Mandela and Paul Kagame can inspire hope and mould a nation. Sadly, Uganda is walking the footsteps of the worse Africa has produced. We need to stand up and oppose this creeping monarchy.