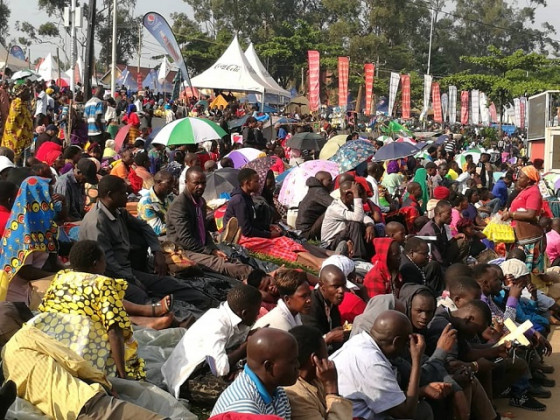 Fred Muhereza arrived on Tuesday from Isingiro district. He sought to buy drinking water and food when he arrived because he was hungry, but was turned away by the hiked prices.

KAMPALA, UGANDA: Pilgrims are feeling the pinch of the rising commodity prices, with many missing several meals.

Fred Muhereza arrived on Tuesday from Isingiro district. He sought to buy drinking water and food when he arrived because he was hungry, but was turned away by the hiked prices.

Muhereza says that during the previous celebrations, they used to buy food at 1,500 to shillings 2,000, however, a meal now costs 3,000 Shillings.

Jackson Karugaba, another pilgrim from Mbarara says that he had planned to spend roughly 20,000 Shillings on food along the way to Namugongo and 15,000 while at Namugongo.

But Karugaba says that before reaching Namugongo, he had already spent 35,000 Shillings. He adds that due to the hike in commodity prices, few well-wishers gave the pilgrims food during the trek to Namugongo.

Those that established restaurants at the shrines are also counting losses as some pilgrims forego some meals. In previous celebrations, the restaurants would be filled with pilgrims.

Juliet Nakwago, a food vendor at the Catholic Shrines says that the price of food has gone up which has turned away her customers.

Phoebe Tumusiime, another food vendor observes that they initially planned to sell a plate of food at 4,000 shillings, but consumers do not turn up. She goes on to say that in order to attract pilgrims, the costs were reduced to 3,000 Shillings, but the quantity of food served was reduced.

The commodity prices have also limited several individuals and organizations that used to offer complimentary meals for pilgrims at sites.

The priest in charge of Catholic Shrines, Rev Fr Vincent Lubega notes that over the years, parishioners and a few volunteers have been feeding pilgrims, particularly those who arrive early, by offering three meals a day as well as drinking water.

The organizing committee of this year’s Martyr’s day is concerned that more people will be stranded at the shrines after the celebrations.

Luke Oweyesigyire, the Deputy Kampala Metropolitan Police Spokesperson notes that police are also seeking resources to cater for pilgrims who will get stranded after the celebrations.

“Of course we anticipate this to happen. Police have over the years been helping such people to return home. We will do the same this year,” he adds.