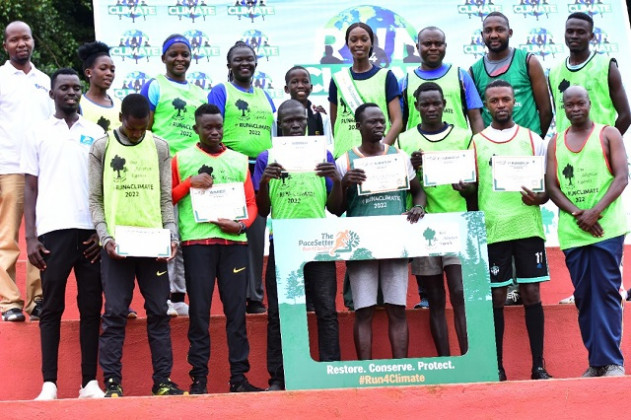 The run was held under the theme, “Protect, Restore and Conserve,” with an aim to raise funds to grow 100,000 trees and restore 200 acres of degraded land across the country.

The run was held under the theme, “Protect, Restore and Conserve,” with an aim to raise funds to grow 100,000 trees and restore 200 acres of degraded land across the country.

The 10km race was won by Otim Emmanuel while the 5Km was won by Amadile Majip. A forest of 2,000 and 1,000 trees respectively will be planted in their names in honour of their win.

“Restoration is needed because Uganda has lost a lot of its forest cover, meaning that we do not have the sync for the carbon that pollutes the atmosphere leading to global warming.”

According to the National Forestry Authority, the country is currently losing an average of 122,000 hectares of forest cover annually.

“In 1990, we had 24% of the total land coverage of Uganda under forests, it decreased to around 9% by 2013. We have slightly recovered, increasing from 9% to 12.4% at the end of 2020,” noted Issa Katwesigye, Assistant Commissioner Forestry department at the Ministry of Water and Environment. We hope to get to 24% of forest cover by Vision 2040.

“It’s each and everyone’s responsibility to ensure our landscapes are restored and the forests are restored to play their ecosystem functions.”

The trees grown will be tracked and mapped using the Tree adoption mobile phone technology and satellite imagery by species, planter and GPS code to improve transparency and monitoring.

Last year, the organization held its 1st edition of the Run4Climate and contributed to the planting and growing of 30,000 trees in communities in climate-ravaged areas of Bududa.