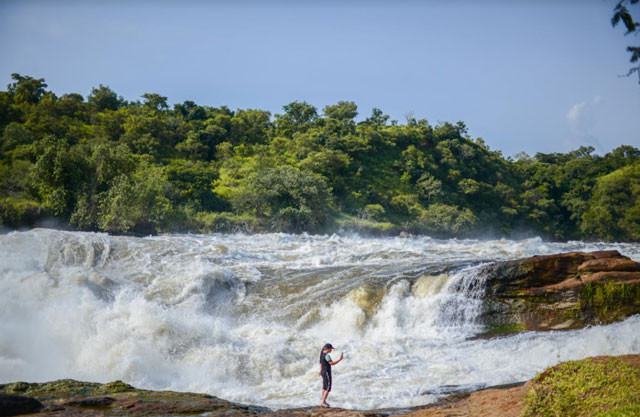 From June 25-28, I was part of a big group of journalists that left Kampala for Murchison Falls National Park

KARUMA, UGANDA: The Uganda Tourism Board (UTB) has started implementing a three – year plan to showcase Uganda’s tourism potential to the world.

From June 25-28, I was part of a big group of journalists that left Kampala for Murchison Falls National Park, as UTB stepped up its media campaign to showcase one of the most popular tourist destinations in Uganda.

Our focus was on the numerous destinations dotted on the 270km route to the Murchison Falls National Park.

Lilly Ajarova, UTB’s chief executive officer who led the group to the destination, said travel experiences to the different destinations enroute to Murchison Falls National Park, is key for marketing destination Uganda, the Pearl of Africa.

Even before we reached world famed Murchison, I got to see a rhino sanctuary, a powerful hydro power dam, and the beautiful sights of Acwa water falls and river. These other interesting tourist destinations make the journey even more treasured.

Ajarova said, Uganda being a friendly, welcoming country gives it an upper hand to attract private sector investments, more tourists both domestically and beyond.

She said, UTB is implementing a three – year plan with among other things media campaigns to showcase Uganda’s tourism potential to the world.

“You’re an important voice to the sector,” she told us on June 26, at a workshop held at Tilenga Safari Lodge.

First stop for us was at Uganda’s largest hydro power dam- Karuma (600MW) that is yet to be commissioned. The dam is approx. 117kilometers away to our final destination – Murchison Falls National Park.

Karuma hydropower plant is a run-of-the-river project being built on the Nile River downstream of the Kyoga Lake in Kyandongo district, 270km from Kampala, Uganda.

For starters, this facility is a must visit. Its electrical-mechanical installations are located approx.100 metres underground, with 26.5 kilometres of underground access roads, making it, the 14th largest underground power station in the world.

Second stop for us was at the Ziwa Rhino Sanctuary, which is located in the Nakasongola district off the Gulu High Way. It is home to the only wild rhinos in Uganda.

The sanctuary is the home to 33 rhinos, and before the end of the year, up to seven newborns are expected to be delivered, which will push the Southern White Rhino population to 40.

The sanctuary is the only place in the country, where one can observe these endangered creatures in the wild which is why any tourist must pick interest in exploring this attraction.

At this Sanctuary, one has to travel approx.104kilometers to make it to Murchison Falls National Park.

Third stop, and our base for a day or two, is Tilenga Safari Lodge, a haven of comfort and serenity located on the northern park boundaries of Murchison Falls National Park , just 1.7km away from Tangi gate on the main Karuma-Pakwach road.

The proprietor of Tilenga Safari Lodge, Thembo Nyombi, who is also a top executive at Uganda Communication Commission (UCC) said, the country’s endowed tourist destinations coupled with political stability and a welcoming population, are key supporting factors while one is investing in the tourism sector.

“I am happy you are here to tell the world that Uganda is home to several tourist destinations,” Nyombi said, “We urge the world to visit Murchison Falls National Park and other destinations in the country.”

On June 27, we explored Acwa Falls on Acwa River. We trekked through the shrubs for over three hours to get to the attractive Acwa Falls on the Acwa River, which originates from Keyo Hills in Amuru district, and has several falls on it that pour into River Nile.

We were humbled to visit three communities neighboring Pakwach main town, where communities welcomed us with traditional dance and drama, and offered us music and art instruments at a cost.

We also took a game drive to the Murchison Falls National Part, where we viewed beautiful animals including elephants, Hippos, Kobs, Chimpanzee, Cheetah and more.

It was an interesting trip that will remind travel enthusiasts that Uganda is indeed the ‘Pearl of Africa’.