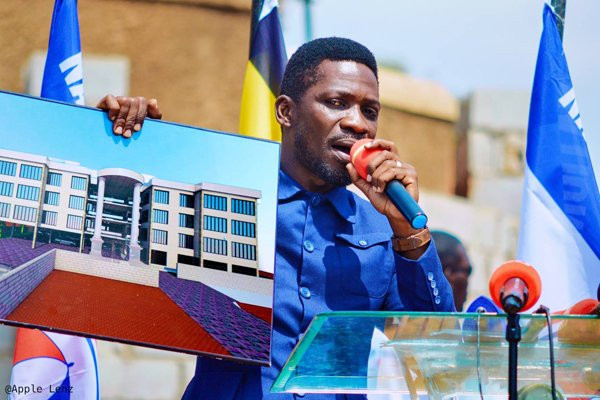 NUP President Robert Kyagulanyi alias Bobi Wine said they decided to move away from their home in Kamwokya, as it was too small for some party activities.

Robert Kyagulanyi alias Bobi Wine shows the artistic design of the party headquarters that will be constructed in Makerere Kavule. Photo | NUP Media

KAMPALA, UGANDA: The opposition National Unity Platform (NUP) party has unveiled plans for the construction of their new headquarters that will be situated in Makerere Kavule, Kawempe division in Kampala.

This was during the groundbreaking function held on Tuesday, July 12, 2022, in Kampala.

Speaking at the event on Tuesday, NUP President Robert Kyagulanyi alias Bobi Wine said they decided to move away from their home in Kamwokya, which was too small for some party activities.

“We are doing this to show that even though this idea started with me, it is not mine alone. This is now your home. It is the headquarters of the incoming government,” he said.

According to the part Secretary-General, Mr. David Lewis Rubongoya, they have acquired the new place as they move away from Kamwokya-based offices which he says will be maintained and turned into a training facility for the youths.

“This is one of our accountability processes as we wait to build on this land. We have bought it through legal means,” Mr. Rubongoya said adding that the acquisition of the offices is part of the long list of new items the party has bought.

On his part, Hon. Joel Ssenyonyi (Nakawa West) who is also the NUP spokesperson said that they are going to increase the size of the land which is close to one acre.

He also revealed that the money to buy the three plots of land was mobilized from party leaders’ contributions as well as donations and funding from parliament.