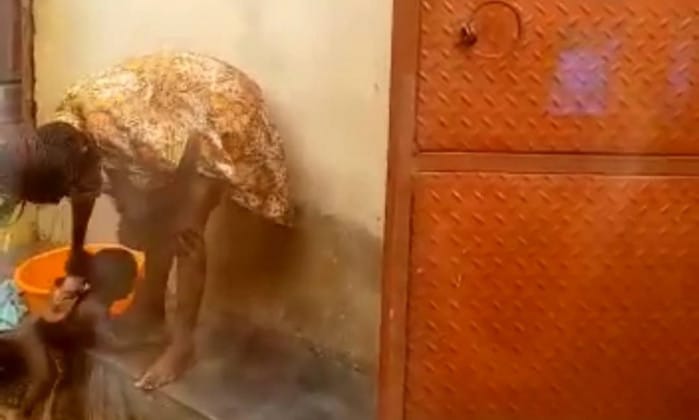 In the less than two minutes video, a woman in her early 20’s is seen beating a little child repeatedly with a shoe while hurling all sorts of sharp words at the child.

LUWERO, UGANDA: The police in Luwero district have arrested a 22-year-old woman who was filmed battering her own child in a video that has since gone viral on social media.

The woman identified as one Dorothy Nabulime a mother of three a resident of Busula village, Wobulenzi in Luwero district was arrested after police got information of the nasty video making rounds on the internet.

In the less than two minutes video, a woman in her early 20’s is seen beating a little child repeatedly with a shoe while hurling all sorts of sharp words at the child.

The child, a two-year-old, falls out of the basin, onto the verandah, and down onto the ground, headfirst – but the bitter woman continues to beat her vigorously with the shoe, asking her to get up and bathe.

She hits the child’s head, face, back, arms – anywhere the shoe will land.

Having landed on the video, several social media users began sharing it across different channels on Friday night whilst calling out the woman’s violent behaviour.

Dembe FM’s Isaac Katende alias Kasuku and NTV Uganda’s Faridah Nakazibwe also shared the video on Twitter calling upon their followers to share the video until it reaches to the relevant authorities so that the woman can be arrested and brought to book.

A few hours later, Police confirmed arresting the woman in the video whom they identified as Dorothy Nabulime.

“It was today on 3rd September 2022 at around 1500/c when the OC Busula Police Station recieved information that a video that was circulating on social media was captured in his area of responsibility,” Police said in a statement.

“Suspect has been arrested and charged of torture and the victim was handed over to the close relatives pending further investigations into the matter,” the statement adds.

Nabulime is reportedly the mother of the two-year-old child in the video and she has will brought before court over assault charges.

According to more information gathered, Nabulime (22) is a mother of three.