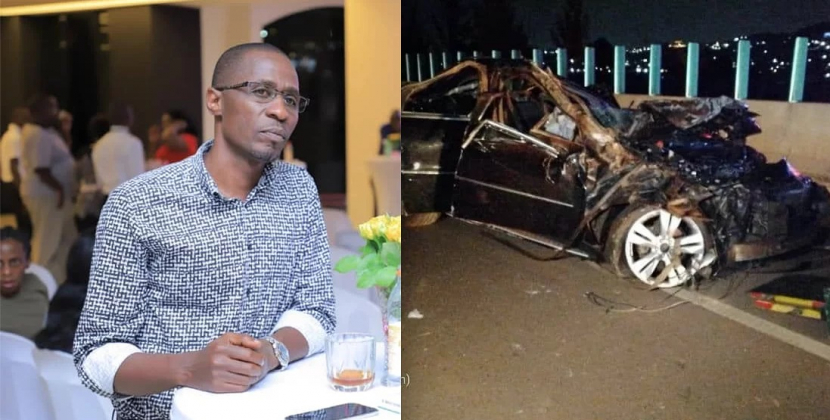 The accident happened at Nakigala along the Busega-Kajjansi Express Highway at around 10 pm on Saturday, October 22, 2022.

Galaxy FM Co-Director Pius Kamugisha (L), right is the wreckage of the benz he was driving

KAMPALA, UGANDA: The entire fraternity at Galaxy FM is mourning the passing of one of its directors Mr Pius Kamugisha aka Uncle Pio who perished in a nasty road crush along the Express Highway.

The accident happened at Nakigala along the Busega-Kajjansi Express Highway at around 10 pm on Saturday, October 22, 2022.

According to Uganda Traffic Police PRO, ASP Faridah Nampiima, Mr Kamugisha who was driving a Benz registration number UBK 320P allegedly tried to overtake a Toyota Hilux registration number UG 0382D driven by Lt Col Ephraim Byaruhanga, the intelligence officer for the UPDF first infantry division in Kakiri, he, however, ended up knocking the latter before veering off the main road.

“It’s alleged that both drivers of both motor vehicles UBK 320P Benz and UG 0382D were from Entebbe side heading to Busega side via Entebbe-Kampala Expressway and towards Nakigalala at Kilometer 10, the driver of UBK 320P(Kamugisha) who was speeding decided to overtake the Toyota Hilux which was driving in the outer lane at a short distance and in the process, he knocked it*Hilus) on the rear light on the driver’s side,” Nampiima said in a Sunday morning police statement.

“Kamugisha, the deceased lost control and knocked the middle concrete barrier, the vehicle crossed back to the outer lane, rolled to the trench then overturned several times up to the resting position approximately 600m from the point of impact,” she added.

Police say that Kamugisha sustained serious injuries on the head as well as a fractured arm but died as he was being rushed to Mulago Hospital by responders.

“The cause of the accident has been attributed to reckless and drink driving as some bottles of alcohol were recovered from the vehicle of the deceased.”

A video captured by responders shows that the Benz got deformed after the nasty accident, having rolled several times into the trench.

A born of Ibanda, Pius Kamugisha and colleagues have been versatile in business. They started with an SMS company (Blue Cube) around 2010 and ventured into the bar business – opening up now defunct, Club Amnesia on Kampala Road and Virgin Island in Bugolobi.

Galaxy FM Sunday posted a statement confirming the passing on of Mr Pius Kamugisha who at the time of his death was a Co-Director and Chairman of one of the leading funky radio stations in the country.

“Management regrets to announce the untimely death of our Co-Director and Chairman, Mr. Pius Kamugisha that occurred on Saturday, October 22, 2022. Pius died in an accident along the Busega-Kajjansi Express Highway,” Management said in a statement.

According to the statement, burial and vigil arrangements will be shared in due course.

May your soul Rest in Peace Uncle Pio