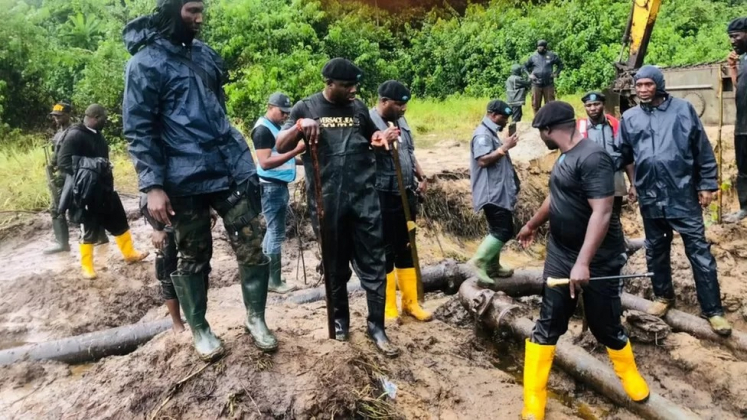 The recent burning of a vessel seized on allegations of carrying 650,000 litres of stolen crude oil in Delta state has also raised eyebrows.

A network of illegal oil pipelines being unearthed in Nigeria’s Niger Delta region has revealed the extent of oil theft in the country, astounding even the most cynical about Nigeria’s obscure but hugely lucrative oil industry.

In Delta state, thieves built their own 4km- (2.5 mile) long pipeline through the heavily guarded creeks to the Atlantic Ocean. There, barges and vessels blatantly loaded the stolen oil from a 24-foot rig visible from miles on the open waters.

“It was a professional job,” said the head of the Nigerian National Petroleum Company Limited (NNPCL), Mele Kyari, wading through the swamps as he retraced the slick path during a televised visit to the scene.

Crude oil is Nigeria’s main export but production, and revenue, has been dwindling for years because of thieves, authorities say. Oil production fell from 2.5 million barrels per day in 2011 to just over a million in July 2022, according to the regulator.

Authorities say more than $3.3bn (£2.9bn) has been lost to crude oil theft since last year and at a time when other oil producers are having a petrodollars splurge, Nigeria can’t even meet its production quota. And it is not that the country can afford to lose money to thieves, it is gripped by widespread poverty and heavily indebted.

Many are saying that the recent discovery of the illegal pipelines confirms long-held suspicions of massive corruption in the sector where there is little transparency.

Nigeria’s oil industry has a documented history of corruption, from an unending fuel subsidy scheme where no-one actually knows how much is imported, to the shadowy allotment of oil exploration blocks.

That the heist was discovered by a private security firm and not the authorities has also added to the anger.

But Government Ekpemupolo, known as Tompolo, is no ordinary private security contractor.

The 51-year-old chief from Gbaramatu kingdom in oil-rich Delta state was in the past involved in blowing up the very oil pipelines he is now guarding after a controversial 48bn naira ($110m; £98m) contract from the government at the end of August.

He is arguably Nigeria’s richest ex oil-militant, was once the country’s most wanted man, and at one point even sold the country a fleet of warships.

He also knows the geography of the Niger Delta, the oil wells and official pipelines, so many believe his comments about the identity of the thieves.

He also suggested that much of the oil was stolen from precisely those areas where there were army and navy checkpoints.

The military has not responded to these allegations, but it is unlikely they will openly contradict a man they have gone into partnership with to crack down on oil theft.

Lucky Irabor, Nigeria’s defence chief, who was part of the retinue that toured the oily trail of the thieves, escorted by Tompolo’s men, said it was an “eye-opener” and promised an investigation.

But it is not the first time Nigeria’s security agencies, especially the top brass of the army and navy, are being fingered over oil theft.

In January, Nyesom Wike, the governor of neighbouring Rivers state, said a police superintendent was involved in oil theft in the Emuoha area of the state and wanted him kicked out.

In 2019, Mr Wike also accused a high-ranking army commander of engaging in massive oil theft in the state, which was denied.

That corruption on this scale happened directly under President Muhammadu Buhari, who also doubles as Nigeria’s Petroleum Minister, has undermined his stance on fighting corruption, said Salaudeen Hashim of CLEEN Foundation, an anti-corruption NGO.

Mr Buhari was elected on a promise of fighting corruption in 2015, but many question how effective his administration has been.

“The extent of the ongoing oil theft might not even be fully known until this administration leaves office in May,” one analyst told the BBC.

Since independence in 1960, Nigeria has been ruled intermittently by military officers who seize power through coups, leaving behind a rot of corruption financed through the vast oil and gas industry in the Niger Delta.

Postings to the region, to protect oil installations, are considered lucrative by both senior security figures and the rank and file, who lobby and pay bribes to get them, said Mr Hashim.

“Once there, it is a race to the bottom to accumulate illegal wealth,” he added.

The recent burning of a vessel seized on allegations of carrying 650,000 litres of stolen crude oil in Delta state has also raised eyebrows.

Many questioned why security operatives were so swift to destroy the evidence – part of Tompolo’s recent success – but Nigeria’s defence chief said as the seized ship was smuggling stolen oil, no investigation was needed.

Tompolo’s motivation for the crackdown on crude-oil theft has left many bewildered. He is getting paid for it, and has spoken glowingly of his love for Nigeria and the Niger Delta environment, but this is the same Tompolo, many say, who blew up oil pipelines in the past.

As one expert pointed out, the illegal oil pipelines being unearthed by Mr Tompolo have so far been in Delta state, where he wields enormous power.

It is unlikely that anyone would have peacefully operated such facilities in his territory for years without his knowledge, they said.

In the past there have been deadly clashes between security forces and armed militants operating in the region but things have been relatively calm for years, and many say underneath that is an agreement by both sides not to interfere with the other’s “business”.

The only losers, it would seem, are law-abiding Nigerians, and perhaps, the oil firms. Not that they will get much sympathy in the country.