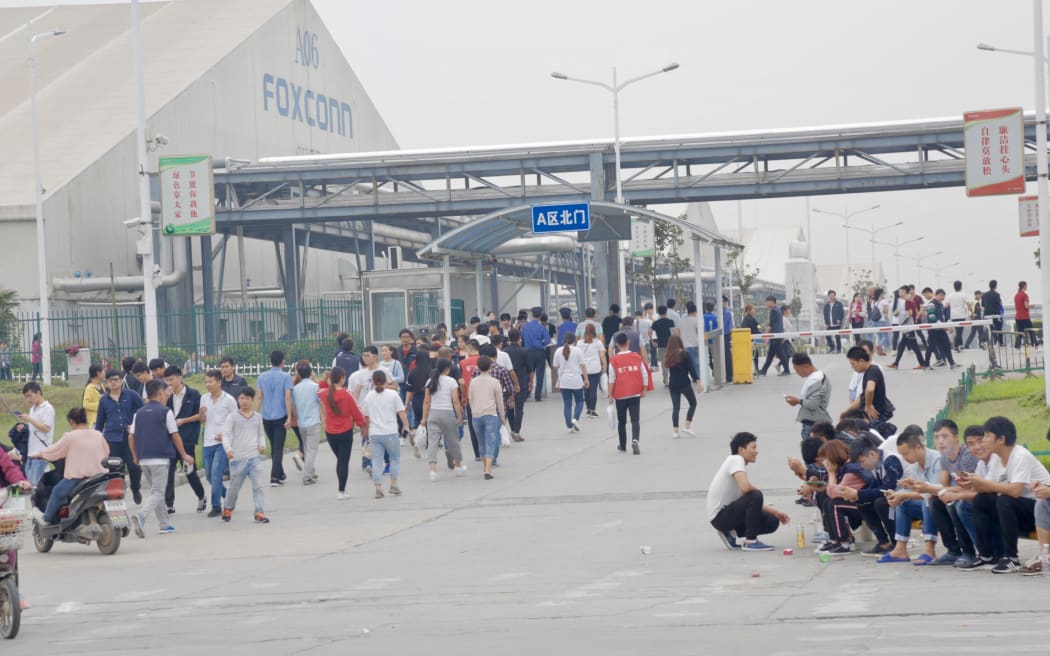 Video shared online showed about 10 people jumping a fence outside the plant, owned by manufacturer Foxconn, in the central city of Zhengzhou.

ZHENGZHOU, CHINA: Workers have broken out of Apple’s largest iPhone assembly factory in China after a Covid outbreak forced staff to lockdown at the workplace.

Video shared online showed about 10 people jumping a fence outside the plant, owned by manufacturer Foxconn, in the central city of Zhengzhou.

Chinese people and businesses are continuing to grapple with President Xi Jinping’s rigid zero-Covid policy. It is not clear how many cases of Covid have been identified at the factory.

However in the last week, Zhengzhou, the capital of China’s Henan province, reported 167 locally transmitted infections – up from 97 the week before, according to Reuters news agency.

The city of about 10 million people was partially locked down as a result, as China continues to use strict lockdown measures to deal with Covid.

Foxconn, which acts as a supplier to US-based Apple, has hundreds of thousands of workers at its Zhengzhou complex and has not provided an official count of how many are infected.

The Taiwan-based company claimed on Sunday that it would not stop workers from leaving.

However, in footage shared on Chinese social media, and by the BBC’s China correspondent Stephen McDonnell, workers were allegedly filmed escaping from the grounds to begin lengthy walks back to their hometowns in a bid to avoid being caught on public transport.

One 22-year-old worker, surnamed Xia, told the Financial Times it was “total chaos in the dormitories” he and colleagues were being kept in. “We jumped a plastic fence and a metal fence to get out of the campus,” he added.

Workers also claimed the area surrounding the plant had been locked down for days, with Covid-positive workers being subjected to daily testing and quarantines to try to contain the outbreak.

Last week, on 19 October, Foxconn announced it was banning all dine-in catering at the Zhengzhou plant and required workers to eat meals in their rooms.

At the same time, the company told reporters it was maintaining “normal production” as the plant ramped up production of the latest iPhone 14 models.

“The government agreed to resume dine-in meals to improve the convenience and satisfaction of employees’ lives,” Foxconn said in a statement on Sunday.

It added that for those wanting to return home, “the [plant] is co-operating with the government to organise personnel and vehicles to provide a point-to-point orderly return service for employees from today”.

The BBC has reached out to Foxconn for comment.

Under China’s strict zero-Covid policy, cities are given powers to act swiftly to quell any outbreaks of the virus. This includes anything from full-scale lockdowns to regular testing and travel restrictions.

Many had hoped President Xi would drop the legislation before the end of the year but at the recent 20th Communist Party congress, he made clear this was unlikely to happen anytime soon.