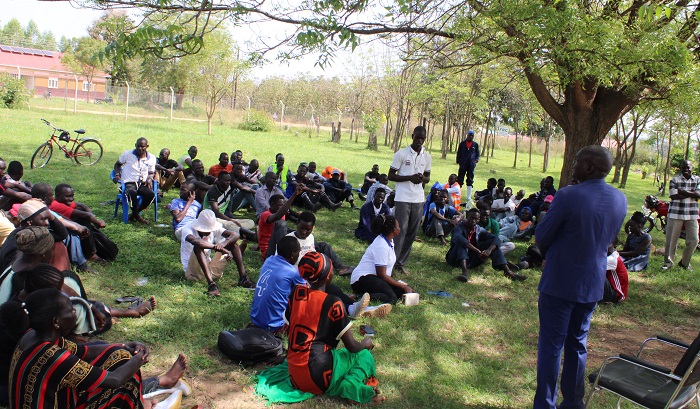 The youths who were already charged demanded to be paid immediately or else they will camp at the office until the DHO yields to their demands.

ADJUMANI, UGANDA: A group of youths in Adjumani town drafted to implement the Indoor Residual Spraying [IRS] of mosquitoes Project under the Ministry of Health have today, November 25, 2022, momentarily camped at the office of the District Health Officer (DHO) protesting the delayed payment of training allowances amounting to shs8.7m.

The 65 youths mainly comprising of school leavers were trained early this month to handle the Indoor residual spraying program in Adjumani town and were trained for five days each of them was allocated shs 22.000 as a training allowance but the office of DHO did not effect the payment.

The team leader of the aggrieved group Baatiyo Alice blamed the Focal person of the indoor residual spraying project Mr Dragule Robert whom she accuses of creating serious information gaps by refusing to address them on the delay and declining to answer telephone calls seeking explanations.

Baatiyo explained that the team became worried after all the other 14 groups across the district have been paid their training allowance including their neighbours in Cesia parish Adjumani town and yet nothing was mentioned about paying them.

The DHO Dr Drametu Dominic told the unruly workforce that his office has completed all the steps for payment but now for eight days in a row the integrated financial management system[IFMS]has failed creating a dilemma.

“Am appealing to you to resume work as my office makes up a follow-up for expediting the payment because your money is already in the pipeline and every worker will be paid money which is due to him or her,” Dr Drametu said amid heckling from the rowdy youth.

But the youths who were already charged demanded to be paid immediately or else they will camp at the office until the DHO yields to their demands.

It took the intervention of CAO Oryono Grandfield to calm the situation, he corroborated the statement of the DHO Dr, Drametu Dominic on the unnecessary breakdown in the IFMS system leading to the delay in payment.

Mr Oryono then asked the rowdy youth to give him the chance to consult with the Chief Finance officer Mr Leku Samuel and a team from the office of DHO.

To the much-awaited relief of the disgruntled youth, when CAO Oryono Grandfield came out of the meeting at around 1:00 pm he announced that the consultation has prospered and requested the team to wait for two hours for the sub-accountant to pay them.

Information obtained from the Adjumani district health office shows that malaria is the number one killer disease and the infection rate as of 2021-2022, the financial year is 58%.

The Indoor Residual Spraying program, which targets all the districts in West Nile officially started on November 7, 2022, and is scheduled to run for 25 days.

About 90.000 houses including commercial buildings have been mapped to be sprayed during the indoor residual spraying {IRS} operation.

By the time of filling the report, the DHO Dr Drametu Dominic had confirmed that the aggrieved party have been paid every coin they owe the district and advised them to resume work.