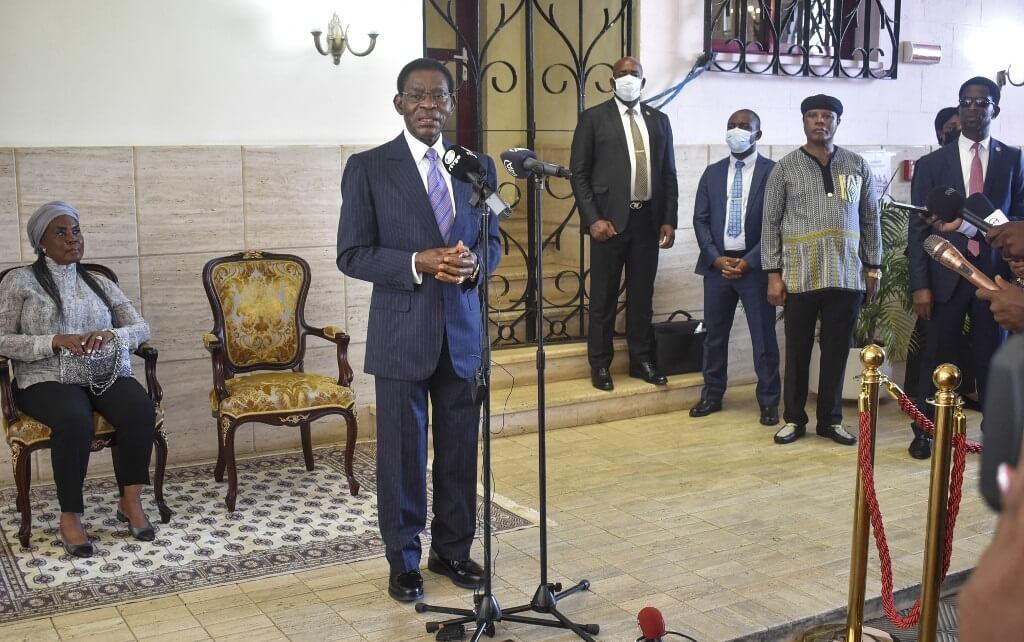 Obiang, 80, who seized power in a 1979 coup, is the longest-ruling head of state in the world excluding monarchs. He has never officially been re-elected with less than 93 percent of the vote.

MALABO (AFP): Equatorial Guinea’s ruler Teodoro Obiang Nguema Mbasogo has been re-elected to a sixth term as president with 94.9% of the votes cast, election officials announced on Saturday, putting turnout for the vote at 98 percent.

Obiang, 80, who seized power in a 1979 coup, is the longest-ruling head of state in the world excluding monarchs. He has never officially been re-elected with less than 93 percent of the vote.

Electoral commission head Faustino Ndong Esono Eyang confirmed that Obiang would serve another seven years in the top job. The commission said the turnout rate for the election was 98 per cent.

The landslide result was widely expected in the oil-rich and authoritarian Central African nation, where the political opposition is extremely weak.

Obiang had the backing of a coalition of 15 parties, including his all-powerful ruling Democratic Party of Equatorial Guinea (PDGE).

The PDGE, which was the country’s only legal political movement until 1991, also swept all seats in the National Assembly and the Senate.

The percentages won by the opposition candidates, Andres Esono Ondo of the Convergence for Social Democracy and Buenaventura Monsuy Asumu of the Social Democratic Coalition Party, were not announced, with both garnering just a few thousand votes.

“The definitive results of the vote find in our favour once more,” Obiang’s son, Vice President Teodoro Nguema Obiang Mangue, wrote on Twitter.

“We will continue to prove that we are a great political party.”

Obiang has ruled Equatorial Guinea for more than 43 years after ousting his uncle, Francisco Macias Nguema, who was then executed by a firing squad.

He has suppressed dissent and seen off a string of attempted coups in the Spanish-speaking nation.

Security forces arrested opposition figures in the weeks before the result, with the regime saying it was thwarting a “conspiracy” to commit attacks in the capital Malabo and economic hub Bata.

The authorities also closed the country’s land borders with neighbouring Gabon and Cameroon before campaigning began, saying it was foiling infiltrators from disrupting the vote.

Obiang is just the second president in Equatorial Guinea’s history since it gained independence in 1968 from Spain, its colonial power for nearly two centuries.

“Equatorial Guinea’s history has been repeating itself for 43 years and the political vision established by the government will continue after this election,” Justo Bolekia, a professor at Spain’s University of Salamanca, told AFP.

“It was predictable, including for the opposition. We were even expecting a score closer to 98 percent,” he added.

The discovery of offshore oil in the mid-1990s turned Equatorial Guinea into sub-Saharan Africa’s third-richest country in terms of per-capita income in 2021.

But the wealth has remained concentrated in the hands of a few families.

In 2006, when the oil boom was in full swing, more than three quarters of the population lived in extreme poverty, or on less than $1.90 a day, according to the World Bank. There have been no new figures since.

The country also has a reputation for graft, ranking 172 out of 180 nations on Transparency International’s 2021 Corruption Perceptions Index.