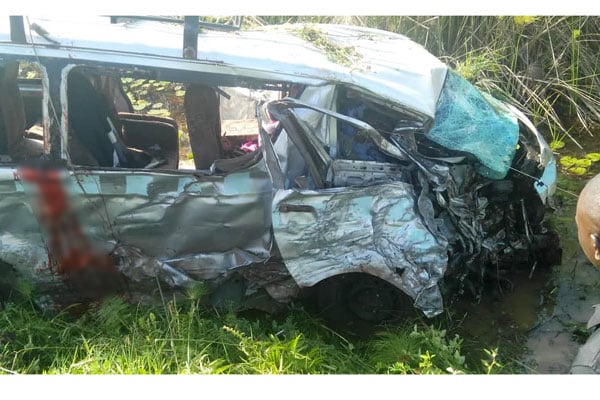 The accident involved a Toyota Noah and a Toyota Hiace commuter taxi, in an incident that happened near Jalia City’s one-stop centre in Mpigi District at around 4 pm.

T he wreckage of the taxi that was transporting mourners before it collided with Toyota Noah along Kampala- Masaka road on November 26, 2022.

MPIGI, UGANDA: Two people died on the spot, with 15 others injured following a nasty road crash that happened along the Kampala – Masaka highway on Saturday evening. The accident involved a Toyota Noah and a Toyota Hiace commuter taxi, in an incident that happened near Jalia City’s one-stop centre in Mpigi District at around 4 pm.

The deceased have been identified as Abdul Ssekkuma, the driver of the Toyota Hiace and Sandra Akurut, residents of Nansana, Wakiso and Namungoona, Kampala District respectively.

The unidentified woman who was driving a Toyota Noah sustained severe injuries and was, together with other survivors rushed to Nkozi Hospital and Buwama Health Centre IV for treatment.

“It is a rainy season and roads tend to be slippery. We are also approaching the festive season where we usually record increased road crashes. Let our people adhere to traffic regulations. A big number of such road crashes is as a result of human errors which can be minimized but most motorists have failed to take heed and we end up losing lives,” he said.

According to Sam Ssekitto, one of the eyewitnesses, the crash was as a result of speeding by both drivers of the ill-fated vehicles. He said most of the survivors were travelling in the taxi heading to Rakai District to attend a burial ceremony.

The report says on average, Uganda loses approximately 10 people per day due to road crashes.