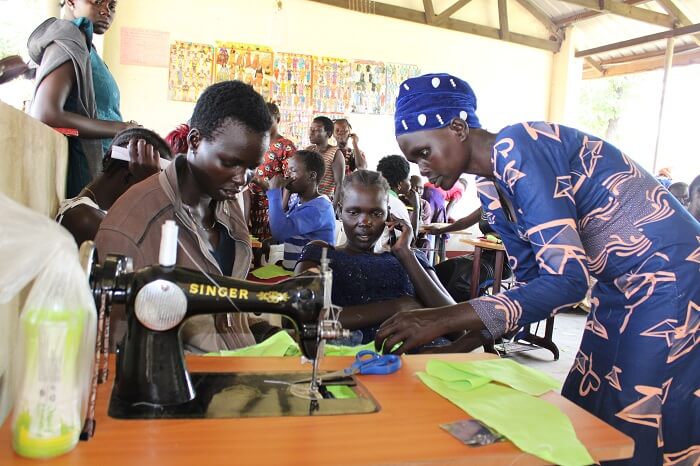 Some of the refugee ladies taking on tailoring sessions

ADJUMANI: Although bricklaying and concrete practice has been regarded as the job for men, some refugee women in Ayilo 1 refugee settlement in Adjumani have defied the odds by joining the trade under the GIZ-funded project for Skilling and Youth Empowerment (SKYEM) a project that is implemented by Norwegian Refugee Council (NRC)

The Norwegian Refugee Council an International NGO working among the refugee communities in the West Nile region and other refugee hosting districts in Uganda has set up Vocational Skills Training centers in Adjumani for skilling the desperate and needy youths in the refugee settlements and the host communities.

Sunday Christine a widow who lost her husband 7 years ago, testifies that she has been fending for her children by brewing alcohol and the constant exposure to the naked fire made her develop health complications.

The widow who is now beaming with life is learning building and concrete practice, she said she chose the course because it is less competitive for females and believes if she is up to the task she will get favors from contractors and individual construction sites.

“I can no longer sit and brew local waragi to feed my family, I want to learn to build. My challenge is when I finish, I will not have the tools to start work. Am appealing to the implementing partners to support us with start kits or capital” Sunday stated.

Ms. Margrate Kojoki who is from Ayilo 1, is a mother of 6 children, she has been making pancakes and brewing local alcohol for her livelihood but has decided to join the skills training and do bakery and catering which she believes will improve her household income.

“You have now trained us, but after the three months training we may not have money to start our own business and buy start-up kits”

Akuku Samuel a refugee of the Ayilo II refugee settlement said he sees a ray of hope in his life as the vocational training is equipping him with the knowledge of motorcycle repair and servicing which will enhance his income since he has been in the business as an unskilled laborer.

Mr.Richard Ondoga, a senior three dropout from Otze sub-county in Moyo district said he comes from a poor family background and is currently the one fending for his siblings who need to go to school.

“I grew up in a poor family, I want to grab this opportunity so that I can support my young brothers and my own children,” Ondoga said.

The NRC West Nile area manager Mr. Godfrey Ayen said NRC with funding from GIZ is implementing the skilling for Youth Empowerment (SKYEM) Project in the districts of Adjumani, Terego, and Madi Okollo in the West Nile region.

The project rationale of the skilling according to Mr Godfrey is underpinned by the urgent need to support the youths and women from both refugees and host communities to gain relevant and market-demanded skills to increase their income and find gainful employment.

The Adjumani deputy resident district commissioner Mr. Swadick Angupale said, through the skills training the refugees will be able to support themselves adding that the efforts of NRC supplement governments’ efforts to try to provide services to both refugees and host communities.

The government of Uganda through OPM and the various local governments have been advising UN Agencies, NGOs, and other development agencies to align their programs with that of government especially the National Development Plan III and vision 40,” Angupale said.

Trades that are offered include; ICT, Tailoring and garment cutting, Maintenance of small power plants, Welding and metal fabrication, Catering and hotel management, BCP, and solar installation repair and maintenance.