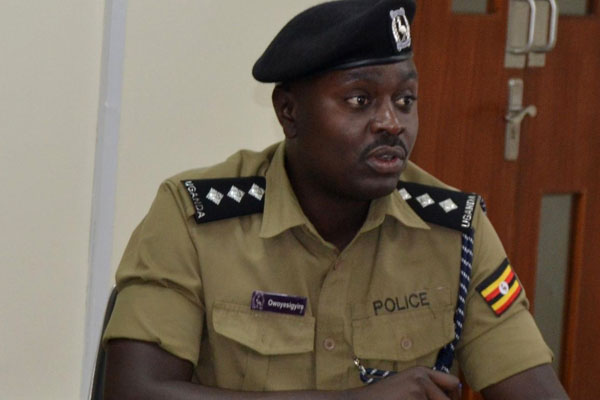 “The victim and suspects have been identified pending arrest. The incident however took place in one of the rentals in Kira Municipality,” Owoyesigyire’s tweet read.

KAMPALA, UGANDA: The police in Kampala has identified the girls who appeared in the torture video assaulting another over a man, and confirmed that a serious manhunt is on to have them arrested over torture and violent conduct.

The violent video that went viral on social media Monday shows a girl only identified as Pretty Nichole (about 18-20 years) being assaulted by three other females who confronted her about dating a man who supposedly belonged to one of them.

The video further shows the females harassing the young-looking girl with slaps, hair pulling, and strokes of canes as they pour water on her while commanding her to stop seeing the man in question.

Several netizens and rights activists later condemned the violent conduct of the ladies and demanded that police identifies the culprits and bring them to justice books for their inhuman actions.

Kampala Metropolitan Police Deputy Spokesman ASP Luke Owoyesigyire has confirmed that the incident which was recorded in one of the rentals in Kira has been followed up and that the torture victim was identified and evacuated for treatment.

“Kawempe Police Division is in touch with the victim and suspects have been identified pending arrest. The incident however took place in one of the rentals in Kira Municipality. We shall inform you of the progress on file. Police condemn all acts of torture,” Owoyesigyire’s tweet read.

Owoyesigyire however noted that upon interaction with the victim who spend a night at Kawempe police station, Nicole blames herself for what happened to her.

“Kawempe Police station has a shelter for victims of torture, kidnap and trafficking. This is where she slept after exhibiting signs of escaping from her mother, it should be noted that the girl also blames herself for what happened to her,” Owoyesigyire said in a Tuesday morning update.

Lawyer Horace Mugabi who pledged to follow up on the case and bring the violent characters to book maintains that the culprits are yet to be arrested.

“Today morning, I managed to visit Kawempe Police Station and met the OC-CID who allowed me & the family access to the victim,” Horace revealed today morning.

“She’s slightly well and currently going in for a medical check-up. The suspects are yet to be arrested and I’ll give an update when they are,” he added.

By press time, this publication was yet to confirm whether the culprits had been apprehended as police are yet to release an official statement but it confirmed that they are being hunted.