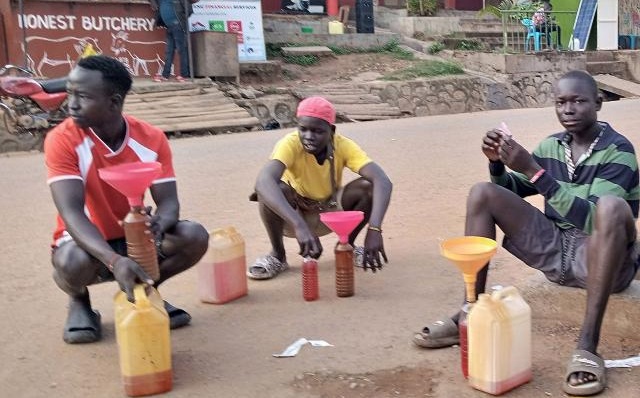 Most of the dealers stage at road junctions and Boda Boda stages while others operate near the entrance of designated fuel stations.

Fuel especially petrol is being sold openly in small jerry cans mainly by the youth on the streets across major towns in the West Nile region. Others operate clandestinely due to the fear of being arrested by URA officials.

Most of the dealers stage at road junctions and Boda Boda stages while others operate near the entrance of designated fuel stations.

Speaking during a joint stakeholder engagement with security and political leaders at Arua City on Friday, Abel Kagumire, the Commissioner of Customs at URA said that they have been losing a lot of revenue in the last three months due to fuel smuggling.

According to the Ministry of Energy, Uganda consumes 6 million litres of fuel daily. However, there has been a 10 percent monthly decline representing 20 million litres in the consumption of fuel, which according to URA has negatively affected the importation volumes.

Alice Akello, the Arua Resident City Commissioner says that the vice of illegal sale of fuel on the streets has become a security matter since petrol is highly flammable and can cause destruction if not well handled.

Geoffrey Feta, the Ayivu East Member of Parliament in Arua City notes that the operations are timely since a number of school-age going children are involved in the illegal vice.

According to Geoffrey Okiswa, the Arua Resident District Commissioner, the illegal sale of fuel in the region is being facilitated by the numerous porous border points which provide a safe haven for smugglers.

Tom Olinga, the Koboko Resident District Commissioner has commended the move noting that the issue of illegal sale of fuel on the streets and other undesignated places in West Nile is unnegotiable.

Abdumutwalib Asiku, the Yumbe LCV Chairperson appealed to URA to create additional customs border stations in the region as a strategy to reduce the vice and facilitate legitimate trade.

According to data from Uganda Revenue Authority, at least 9,600 liters of fuel are smuggled into Uganda through the porous borders, causing the country to lose an estimated 5 billion Shillings annually or over 13.72 Shillings daily.

The Petroleum Supply Act of 2003 provides for the supervision and monitoring of the importation, exportation, transportation, processing, supply, storage, distribution, and, marketing of petroleum products in the country. It Act further prohibits the sale of fuel in Jerry cans.