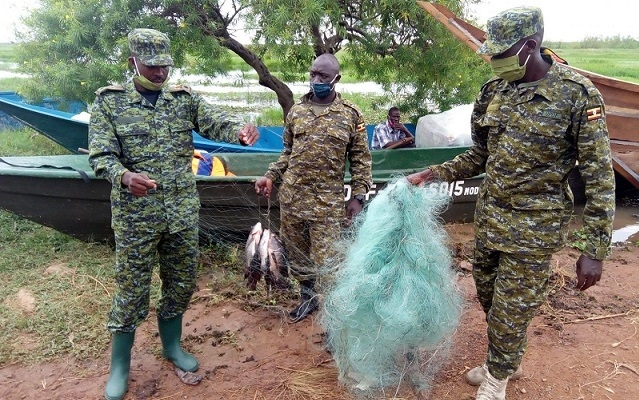 The illegal fishing gear was impounded in various operations which started on Monday in Kikuube, Kagadi and Ntoroko districts under the Commander Lt. Colonel Edward Ijjo.

The most affected fishermen are from Kitebere and Ndaiga landing sites in Kagadi district, Nkondo, Bugoma and Busiki in Kikuube district.

Lt. Colonel Edward Ijjo told Uganda Radio Network in an interview on Wednesday afternoon that the operations were prompted by various complaints from the public on the usage of illegal fishing gear on Lake Albert.

He says the operations will continue until illegal fishing activities are stopped to allow the fish stock to rejuvenate. The operations haven’t gone down well with some fishermen who claim that the impounded fishing gears were their only sources of income. The fishermen also accuse soldiers of using excessive force in their operations.

Simon Peter, one of the affected fishermen at Kitebere landing site in Kagadi district says the soldiers were brutal during their operation.

Rogers Kamanyire, a fisherman at Bugoma landing site says the government should provide them with a special fund to enable them to acquire the recommended fishing gear if it wants to eliminate the use of illegal fishing gears.

Lake Albert employs approximately 56,000 fishermen who harvest more than 100,000 tons of fish per year. Overall, fishing supports the livelihood of more than 1.6 million people in Uganda.

Over the last 15 years, the fisheries sector has played an important social and economic role in the country as one of the key foreign exchange-earners, contributing 2.6 percent of Gross Domestic Product (GDP) and 12 percent to agricultural GDP.