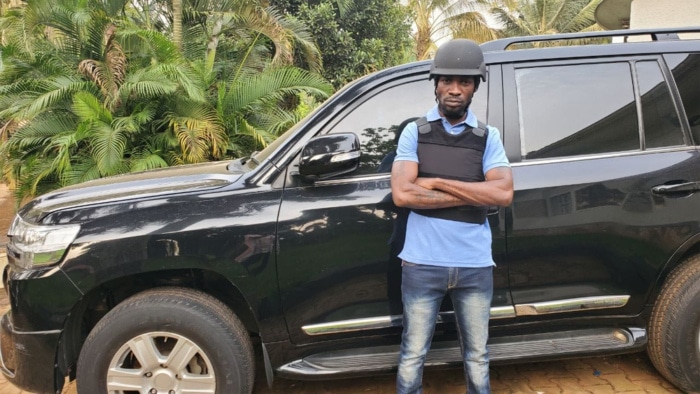 In a letter addressed to Bobi Wine’s lawyers, Wameli and Co. Advocates on Thursday, April 22, URA confirmed that the Toyota Land Cruiser V8, UBJ 667F is truly armored after several inspections and bullet testing was done it.

The tax collecting body further explained that the clearance of the bulletproof car for entry into the country was done on basis of a normal vehicle, contrary to Sections 203 of the East African Community Customs Management Act. 2004.and therefore amounts to a total of UGX 337,698,776.25/= (Uganda Shillings Three Hundred Thirty-Seven Million, Six Hundred Ninty Eight, Seven Hundred Seventy-Six only).

In response, Bobi Wine took to his socials to term the act “another shameful move” by government to frustrate him.

“URA has written to us today requiring me to pay 337,698,776.25/= (Over three hundred million Uganda shillings) for the vehicle which came into the country legally and was cleared by all relevant agencies,” A furious Bobi Wine said upon receiving the URA notice from his lawyers.

“The vehicle was taken to the Directorate of Interpol in Kololo and they cleared it. It was then taken  to the forensics department of Police in Naguru, and they too cleared it. Then we took it to URA and they did their own independent verification and levied the relevant tax which we paid.”

Wine states that the whole clearance process was entirely smooth for one reason that his name hadn’t come into the picture, citing that for several months no authority did raise any concern about the same car. He insinuated that indeed if the car belonged to any other citizen, there wouldn’t be any issue.

“It was only when we transferred the car into my name that they began looking for fault and did not find any. At first they claimed that armoured vehicles require clearance by the Ministry of Defence. But there was no law to back their outrageous claim,” Bobi Wine said.

“That is how they said it was undervalued. We understand they quickly moved and sacked, demoted or persecuted all URA, Interpol and Police staff who did their job and cleared this vehicle. For no reason whatsoever, they punished them for not knowing that the car would end up in Bobi Wine’s name! Others were summoned by CMI for interrogation,” he added.

Bobi Wine has blamed the “irregularity” on the incumbent government presided over by Yoweri Museveni. The opposition leader believes he is being witch-hunted by the state.

He said; “All public institutions are personalized by Gen. Museveni who does with them whatsoever he pleases. As I have consistently said, when you take on Museveni, you have taken on all government institutions and they will gang up against you. The God who defends the weak against the strong is on our side. In the end, we shall look back to these trials and tribulations and make a pledge never to repeat the same mistakes.”