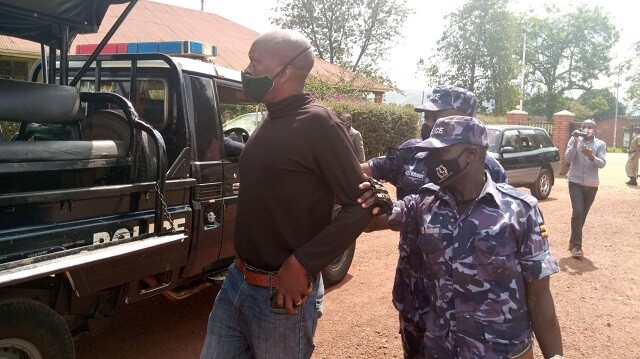 RUBANDA DISTRICT, UGANDA: The deputy speaker of Rubanda district, Pierre Mbabazi Nyetegyereize and two others are in trouble for alleged mismanagement of funds meant for the Kabale Journalists Emyooga Sacco.

Mbabazi, who doubles as the Hamurwa sub-county LC V councilor was arrested on Monday for fraudulently acquiring a loan of Shillings 1.2 million from the journalist’s Sacco yet he is not a journalist.

He was arrested together with Moses Henry Tahoreraho, the Executive Director of Western Media Wards and Bright Manure, the Treasurer of Kabale Municipality Journalists Emyooga Sacco.

Kabale Resident District Commissioner Darius Nandinda ordered the trio’s arrest for their involvement in the alleged mismanagement of Shillings 36 million dispatched to the journalists by the government as start-up capital.

It all started after Kabale District Commercial Officer, Erasmus Natuhamya presented an audit report indicating the gross mismanagement of Kabale Journalist Emyooga Sacco. He revealed that there was no clear record of money used since the Sacco did not have cashbooks, payment vouchers, and receipt books.

He also noted that the Sacco chairperson, Tahoreraho had usurped all powers of the Annual General Meeting, the Board Executive, Vetting, and Supervisory Committees. Natuhamya also revealed that Tahoreraho used his position to recruit none journalists into the Sacco as well as disbursing loans to the members without making any consultation.

He guided that the Sacco members elect another board as soon as possible following the arrest of Tahoreraho and the treasurer.

Nandinda said that the suspects would remain in custody until their relatives pay back the money to the Sacco account and present bank slips to the police.

Shortly after his arrest, Tahoreraho claimed that he was denied a fair hearing and accused the RDC of harassment. He admitted that the Sacco comprises none media professionals, arguing that they did not get sufficient guidance.

Members of the Sacco executive distanced themselves from Tahoreraho’s financial report detailing the expenditure of the Shillings 36million.

The Executive Secretary Andrew Amanya Binyindo said Tahoreraho denied them access to any documents regarding the disbursement of the Sacco funds.

This is not the first time the RDC has ordered the arrest of people involved in the mismanagement of Kabale Municipality Journalist Emyooga Sacco.

In July this year, Nandinda ordered the arrest of Tahoreraho and his executive after members accused them of mismanaging their savings.

Others alleged that Tahoreraho was asking for bribes before enrolling them into the Sacco and issue them loans. Following investigations into the management of Emyooga funds in Kabale municipality about a week ago, the area Member of Parliament Dr. Nicholas Kamara said there was a possibility that funds would never be recovered because they did not have any clear system for loan repayment.

Dr. Kamara told the media that most Saccos had failed to follow guidelines of giving out loans. By the time of filing his report, no borrower had returned any money to his or her respective Sacco. Kabale Microfinance Support Centre received Shs1.6 billion from the government and disbursed Shillings 560 million to Saccos in Kabale municipality.