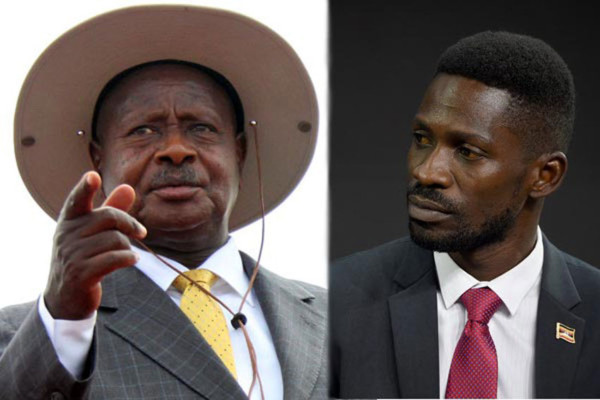 Robert Kyagulanyi and President Museveni clashed in one of the the most contested elections in the country, pitting the young against the old.

Uganda has had a frantic 2021 as it experienced one of the most contested presidential elections, a devastating pandemic and a new war against terrorism.

A three-month presidential election campaign culminated on Jan. 14, with the incumbent, 76-year-old Yoweri Museveni tussling it out with the 38-year-old Robert Kyagulanyi, a popular musician turned politician. There were also other candidates.

Observers described the elections as the most contested in the country, pitting the young against the old. The election period was characterized by violence.

The ongoing COVID-19 pandemic compounded the election process and months later, as argued by some experts, the results were evident. The country was in June hit by the second wave of the pandemic, overwhelming the health sector. Hundreds of lives were lost and hospitals were full of patients, forcing President Museveni to announce a 42 day total lockdown.

“In the previous wave, it took us three to four months to get to the current state of critical and severe patients, while in the second wave, it has taken us less than two weeks to get to the same situation,” Museveni said on June 7 as he announced the second lockdown after the earlier one in March 2020.

Bank of Uganda said that the emergence of “vaccine resistant variants” would continue to weigh on economic activity.

The Ministry of Health in recent weeks announced that the country might be going into the third wave of the pandemic as cases started going up following the emergence of the Omicron variant of COVID-19.

The central bank warned that the Omicron variant could further disrupt the global supply chain, which may have spillover effects thus having a negative impact on the domestic economic performance.

Contact intensive sectors like education and hospitality could further face the brunt of the pandemic if the infection rate increases and containment measures are taken, the bank said.

President Museveni is scheduled to address the country on Dec. 31 on the new measures to deal with the current upsurge of COVID-19 cases. Last month, Museveni said he would fully open the economy in January. All schools would be reopened after close to two years of closure due to the pandemic.

Uganda on Nov. 16 received a rude awakening after two separate bomb blasts went off in the national capital of Kampala, leaving six people including three suicide bombers dead and 33 other people injured. Scenes of cars burning, people calling for help and security personnel cordoning off the bombed places were telecast to the rest of the world.

The attacks came about three weeks after two separate blasts, which were blamed on the Allied Democratic Forces (ADF), an affiliate of the Islamic State in central Africa, killed two people and injured several others in central Uganda.

President Museveni in a televised address blamed the Nov. 16 attacks on the ADF, formerly a Ugandan rebel group, pledging to track down the ADF in their safe haven in the jungles of neighboring eastern Democratic Republic of the Congo.

The Ugandan military on Nov. 30 started joint military operations with its Congolese counterpart against the ADF.