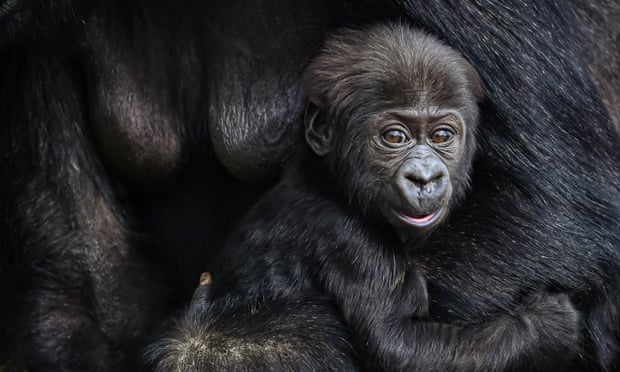 A baby lowland gorilla has been born in Virunga national park in the Democratic Republic of Congo. Photograph: Ben Birchall/PA

DR Congo’s famed Virunga National Park on Friday announced the birth of a lowland gorilla in this tourist region boosting the population of these critically endangered species to seven.

The exciting news of newborn lowland baby gorilla was announced by the park authorities on a tweet sent on Friday, January 7, 2022 saying the new baby was discovered during a patrol in the Tshiaberimu area.
This now brings a total number of these rare lowland pieces to now seven individuals in the park.

“We’re excited to announce the first lowland gorilla birth of the year! Rangers discovered the newborn during a patrol in the Tshiaberimu area yesterday,” park authorities tweeted late on Friday.
“Rangers are working hard to safeguard this vulnerable population which now stands at seven individuals,” it added.

The park authorities said conservationists have long sought to protect the world heritage site’s gorilla population even as violence and instability has plagued the DRC’s eastern provinces for the past 25 years.

Situated on DR Congo’s borders with Rwanda and Uganda, Virunga covers around 7,800 square kilometres of the North Kivu province, of which Goma is the capital. The park was inaugurated in 1925 as a tourist destination and conservation area for wildlife species.

The global population of lowland gorillas has plunged from around 17,000 to fewer than 6,000 today and they continue to experience a rate of decline of 5% per year, according to the park. These are often illegally hunted for bushmeat.

According to Virunga park statistics as per last year (2021), a total of 17 mountain gorillas – a close cousin of the lowland gorilla – were born, and with the 7 lowland species, this brings the total number of gorillas in the park to 24 species, proving a huge boost for tourism in the region.

The Virunga National Park which is largely known as the oldest national park in Africa is a dominant sanctuary for the rare mountain gorillas, which are also present in neighboring Rwanda (Volcanoes National Park) and Uganda in Bwindi and Mgahinga National parks.