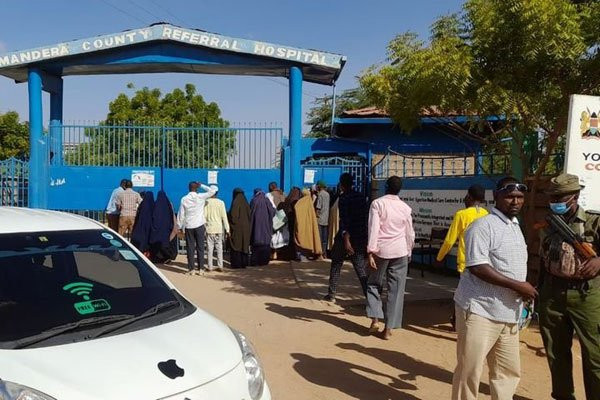 Kenya has suffered several deadly Al-Shabaab attacks in retaliation for sending troops into Somalia in 2011 as part of an African Union force to oust the jihadists.

Residents flock the Mandera County Referral Hospital where victims of the explosion are admitted. PHOTO/NMG

NAIROBI, KENYA: At least seven people have been killed and 13 others injured and admitted at Mandera County Hospital after a minibus matatu they were travelling in was destroyed by a roadside bomb during an ambush by armed men near the border of Somalia on Monday morning.

The attackers opened fire on the 14-seater vehicle after it ran over the explosive about eight kilometers (five miles) from Mandera town on the Kenya-Somali frontier.

“A General Service Unit patrol team, which was on foot and close to the area, responded and engaged the attackers, who fled towards Somalia border direction,” a police report on the incident said.
The attackers used guns and rocket-propelled grenades during the assault, the report added.
Several passengers survived the attack “with various degrees of injuries.”

The Mandera region is prone to raids over its long and porous land border with Somalia, where the al-Shabaab militant group controls swathes of countryside and central government authority in remote areas is weak.

Other regions bordering Somalia are also susceptible to attacks and Kenyan officials are often quick to blame the militants for assaults on its soil.

Kenya has suffered several deadly attacks by al-Shabaab fighters in retaliation for Nairobi sending troops into Somalia in 2011 as part of an African Union force to oust the extremists.

Kenya is a major contributor of troops to the African Union Mission in Somalia (AMISOM).

In 2015, an attack on a university in Garissa, another region sharing a border with Somalia, left 148 people dead, almost all of them students.
Most were shot at point blank range after being identified as Christians.

Last week, a number of diplomatic missions in Nairobi warned of a possible terror attack targeting foreigners in the capital.

The French and German embassies warned of a possible attack within days, while the United States issued a new security alert warning of potential for acts of violence at this time of year in Kenya.

In 2019, al-Shabaab gunmen killed 21 people at an upscale hotel complex in Nairobi, and in 2013 a bloody four-day siege in the capital’s Westgate shopping mall claimed the lives of 67 people.