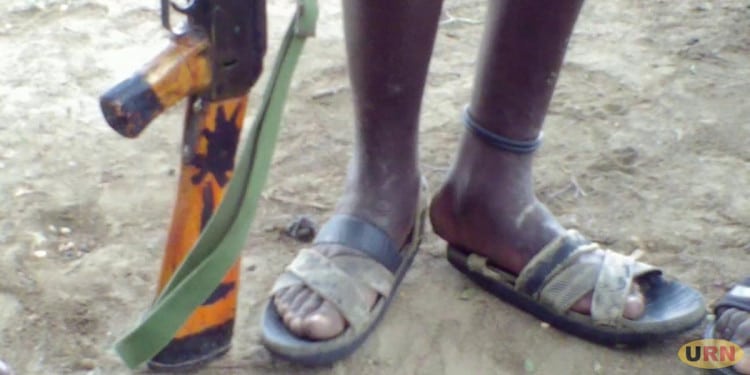 Lucy Nakori, a resident of Loputuk sub-county in Moroto district, says that the warriors who were passing by her home carried away the food she was cooking and continued with their raiding mission.

KARAMOJA, UGANDA: Tension is high among communities in Karamoja sub-region following the escalation of burglaries and armed robberies in homes. Peace is gradually returning to Karamoja following the reduction of cattle rustling by armed warriors.

However, the raiders are reported to have resorted to stealing money, food, and chicken among others. Micheal Lomer, a resident of Kotido sub-county told URN on the phone that suspected rustlers attacked his shop on Tuesday night armed with bows and arrows.

He explains that the warriors first sent a spy who pretended to be a customer and bought waragi before his colleagues struck. Lomer says that raiders ordered him to surrender Shillings 500,000 or risk being killed, which he did to save his life.

‘’They attacked me at around 9:00 pm, I heard one of them saying let’s clear this one we carry his properties, immediately they jumped and grabbed me, then ordered me to pay them all the money I worked for,’’ Lomer said.

He said the warriors have made it a habit to terrorize them by stealing petty items like chicken, and saucepans among other items they come across in the compounds.

Lucy Nakori, a resident of Loputuk sub-county in Moroto district, says that the warriors who were passing by her home carried away the food she was cooking and continued with their raiding mission.

Nakori says that the warriors show up at around 8:00 pm and passed by her home forcing them to flee inside the house leaving the food that was cooking on the stove prompting the warriors to carry the saucepans.

She noted that it’s the food that could have saved them from the warriors because they became excited about food. Isaac Lomuria, the LC 1 chairperson of Iriiri village in Napak district, says the raiders have resumed fresh theft of livestock despite the intervention by security.

Lomuria said the warriors have resorted to harvesting premature crops in gardens just for survival in the bush. ‘’Nowadays these warriors are energetic because they pick people’s maize in the gardens to eat while in the bush. Hunger is no longer a problem for them,” he said.

Lomuria revealed that a group of armed warriors was spotted Wednesday crossing over the areas of Nabwal sub-county.

Brig Gen Joseph Balikudembe, the UPDF 3rd division commander confirmed to URN that the raiders have lost appetite for livestock and they are resorting to petty theft.

Balikudembe observed that due to pressure mounted on warriors, in desperation, most of them have now resorted to targeting village saving scheme boxes and shops.

According to Balikudembe, although they are determined to restore total peace in the region, some leaders have continued frustrating their efforts to arrest the wrong elements in society.

The UPDF 3rd division court martial has so far convicted 650 warriors in connection to livestock theft. Joint security forces have so far recovered 25,206 cows out of 42,000 that were reportedly raided from July last year up to date.