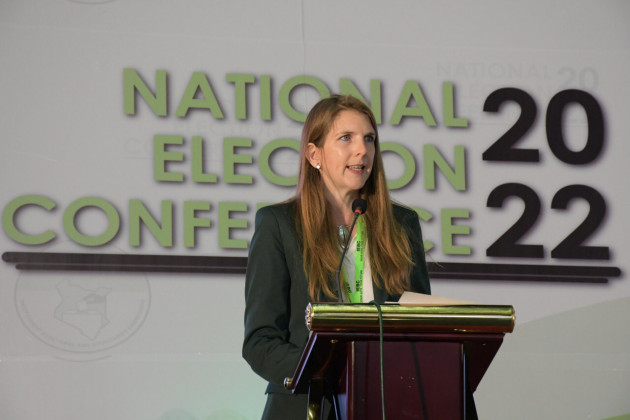 Marriott was responding to claims made on social media that she exerted pressure on the electoral commission to recognise William Ruto as the winner of the contested election.

The high commissioner of the United Kingdom to Kenya, Ms. Jane Marriott has denied accusations that UK meddled in the electoral process of Kenya‘s recently concluded presidential election.

This comes after Raila Odinga, the runner-up in the presidential election, called on unnamed foreign nation on Monday to stop interfering in Kenyan affairs.

Marriott was responding to claims made on social media that she exerted pressure on the electoral commission to recognise William Ruto as the winner of the contested election.

Images of her shaking hands with Ruto and the head of the electoral authority, Wafula Chebukati, emerged online, sparking reactions on social media.

In a series of tweets, Ms Marriott said the UK “does not support nor have a view on any candidates or parties in elections”, terming the claims “misinformation”.

“Who Kenyans elect is a matter for the people of Kenya. We met people from across the political spectrum to explain the UK’s programmes and partnerships with Kenya, including independent institutions,” she said.

Kenya would continue to be a significant partner for the UK, according to Marriott, who also indicated that the country was prepared to back the elected officials.

Meanwhile, Raila Odinga has filed a lawsuit challenging the outcome, calling it “fraudulent.” He claims there was a deliberate attempt to change the result in a stinging 70-page legal argument. The electoral commission said that Odinga received 48.8% of the vote, falling short of William Ruto’s 50.5%.

The commission’s final outcome, according to an impartial monitoring group, was in accordance with its own forecast.

Four of the seven electoral commissioners, however, declined to support the decision, claiming that the manner in which the final results were calculated was “opaque.”

As Odinga arrived to submit the document and other boxes of evidence to the court in a Nairobi suburb, crowds of his supporters cheered and sang outside the building.

One of nine legal petitions he submitted referred to the alleged attempt to change the outcome as “premeditated, unlawful, and criminal.”