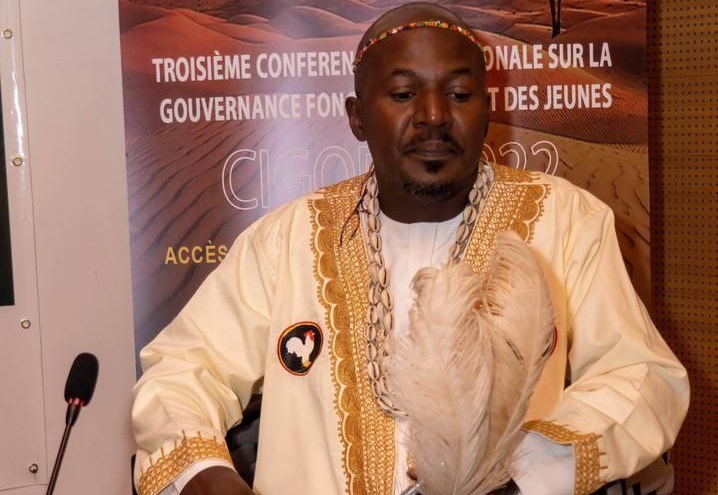 President Museveni on 17, July 2022, gave shs 100m to the leaders of the cultural institutions’ of Madi and Acholi for facilitating the peace process in the conflict-infested Apaa area after efforts by the elected leaders failed to deliver the desperately needed peace in Apaa.

MADI SUB-REGION, UGANDA: A cross-section of Madi cultural chiefs are questioning the integrity of the acting paramount chief (Lopirigo of Madi) Drani Stephen Kongoro after failing to show due diligence and transparently declaring the shs 100m offered by president Museveni for facilitating peace dialogue in the disputed Apaa area.

President Museveni on 17, July 2022, gave shs 100m to the leaders of the cultural institutions’ of Madi and Acholi for facilitating the peace process in the conflict-infested Apaa area after efforts by the elected leaders failed to deliver the desperately needed peace in Apaa.

The duo cultural leaders from Acholi and Madi wrote to the president on July 4, 2022, to give them a chance to carry out a dialogue among their subjects so that lasting peace returns among the two tribes who have co-existed since time immemorial.

The paramount chief Drani Stephen Kongoro during a meeting held on September 18, 2022, at the Adjumani district council board room divulged that the president has released funds for carrying out peace activities in Apaa but refused to disclose the amount of money.

In the same meeting, the district chairman Moyo Anyama William advised him (Chief Drani Stephen) to exhibit utmost transparency and give a detailed account of his interaction with the president including the amount of money and the time frame for implementation of the peace process.

Chief Drani Stephen Kongoro, however, read part of the letter from the president and refused to answer more questions.

Even so the meeting tasked the office of chief Drani Stephen Kongoro to draw a work plan for conducting a series of stakeholder meetings in Adjumani before heading to Apaa for the peace dialogue.

After the meeting, Chief Drain Kongoro personally dished out shs 1m for all the 18 clan chiefs who attended the meeting and asked for more time to allow for adequate preparations for a sequence of peace dialogue in Apaa and other stakeholders in Adjumani town.

What followed after the meeting was total mutual mistrust and suspicion as two weeks later, chief Drani Stephen Kongoro without further consultation handpicked a few chiefs and drove to the palace of Rwoth Achana in Gulu to plot a road map for the dialogue.

The consultation in the palace was inconclusive as no practical action points were identified, Rwoth Achana instead requested all the Acholi chiefs to spend the night in Gulu city for another round of meeting as the Madi chiefs were driven back home.

Chief Drani Stephen Kongoro released shs 3m to his nephew a parish chief in Ukusijoni sub county for facilitating the dialogue in Zoka, but the Ali chief Chandiga on October 12, 2022, down played the issue of the money and managed to mobile a bull and cash and the dialogue at Zoka primary school achieved tremendous success and the participants were treated to a sumptuous meal.

Chief Drani Stephen Kongoro was not bothered by the botched meeting and instead announced he was leaving for AU Cultural leaders conference in Dakar Senegal, he promised to convene another meeting upon his arrival.

The peace dialogue that has been viewed as a lasting solution to the land conflict in Appa has temporarily been abandoned by most of the clan chiefs including Ali clan chief Chandiga Ben pending fresh and transparent road map.

The chiefs have however agreed not to demand accountability for the shs 100m that was given by president Yoweri Museveni for the peace dialogue, since he did not share his vision with other chiefs before lobbying for the money.

Upon his return from Senegal Chief Drani Stephen was hosted on Aulogo F.M, a local radio station in Adjumani on Saturday last week, November 26, 2022, where he made sweeping statements on the shs 100m, and advised elected leaders against meddling in the affairs of Madi cultural institution.

“It is true I received money from president Yoweri Museveni for peace dialogue in Apaa besides, I will submit the accountability to him but not anyone else”. Chief Drani Stephen roared.

Chief Drani Stephen Kongoro appealed to the elected leaders to confine themselves to issues of service delivery to the electorates and stop unwarranted interference into the affairs of the Lopirigo of Madi.

Apparently, the shs 100m president Yoweri Museveni offered for facilitating peace dialogue in the conflict-infested Apaa area has created animosity among the clan chiefs of Madi but Ali chief Chandiga Ben and other chiefs who own or border Apaa disputed area have vowed to continue engaging their partners in Amuru district until meaningful peace return to the area.

Over the years Chief Drani Stephen Kongoro received a lot of respect from his subjects but he later turned his office for survival and sovereignty oblivious that several other structural and legal instruments for the methodical functionality of Madi cultural institution have not been formalized.