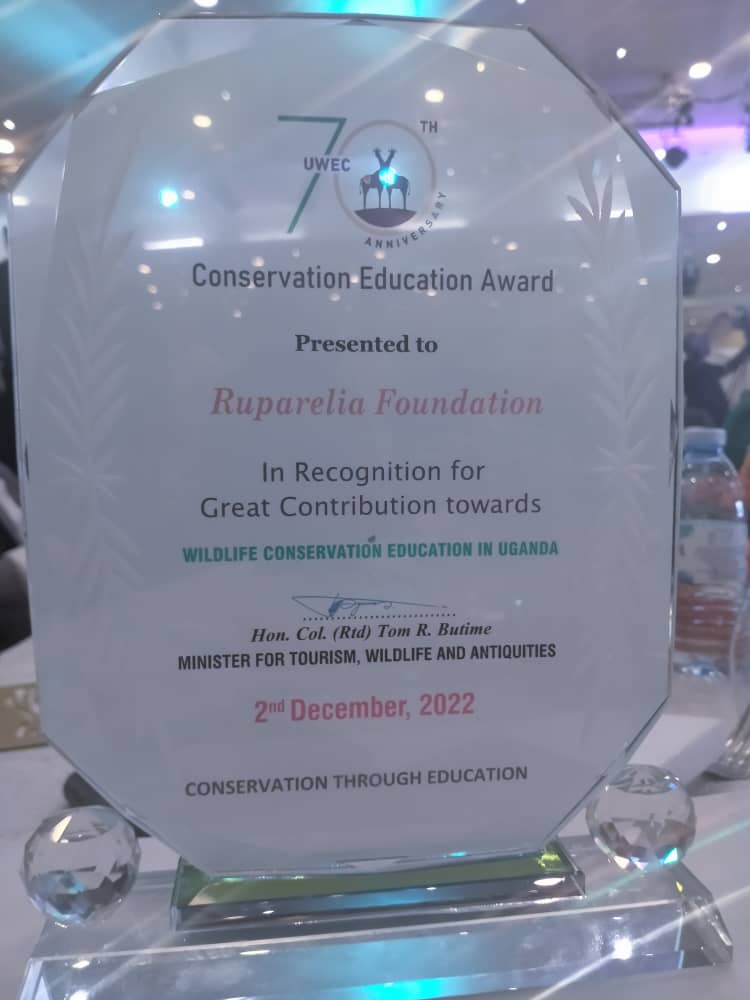 The Foundation founded and chaired by City Tycoon Sudhir Ruparelia was recognized by UWEC for its great contribution towards wildlife conservation and charity works by the Ruparelias all of which have contributed to the growth of the tourism and wildlife sector in Uganda.

For the past ten years, the foundation has worked together with several stakeholders to champion positive change in different communities across the country to improve livelihoods in Uganda.

For instance, in December 2020, the newest baby rhinoceros at Ziwa Rhino Sanctuary in Nakasongola district was named Rae Ruparelia.

The name was decided by Rajiv Ruparelia, the Managing Director Ruparelia Group together with his wife Rae Naiya as one of the conservation strategy during the naming ceremony at Ziwa Rhino Sanctuary.

In February 2021, Dr Sudhir and his family enjoyed their Janan Luwum Day at UWEC, popularly known as Entebbe Zoo, where he reunited with Kabira the Rhino after 20 years. On their visit, Dr Sudhir and family checked out Kabira, now aged 24 years, which is Uganda’s oldest male rhino named after Kabira Country Club, a property owned by the business magnate.

It should also be recalled that in 2001 Sudhir sponsored the translocation of the then three-year-old rhino from Solio Ranch in Kenya to the Entebbe Zoo.

In September 2022, the government of Uganda through the Ministry of Tourism, Wildlife and Antiquities recognised Businessman Sudhir Ruparelia for his efforts in promoting Uganda’s tourism sector.

Presiding over the event as the Chief Guest, the Deputy Speaker of Parliament, Thomas Tayebwa hailed the businessman as one of the investors who hold Uganda at heart.

“In a special way, I congratulate Dr Sudhir Ruparelia, Chairman Speke Group of hotels for your Passion and Leadership in Hospitality and Tourism Development,” Tayebwa said.

“I know people who have been calling Dr Sudhir to go and develop their Countries, I know many, some of them were asking me, but this Sudhir man what did you give him as Uganda? The man has a lot of money and we would like him to come and invest in our areas,” he added.

The Ruparelia Foundation was founded in 2012 by Dr Sudhir & Mrs Jyotsna Ruparelia and runs its programs under the catchphrase theme: “Enriching Lives Together”.

For the past years, Ruparelia Foundation has worked together with several stakeholders to champion positive change in different communities across the country to improve livelihoods in Uganda. To date, more than 600 charitable causes have been funded by the charity.

Ruparelia Foundation strives to create a positive and transformative change in the community by making a real difference in the course of the present day but also has a sustainable plan for every initiative carried out.

To date, more than 700 charitable causes have been funded by the charity.