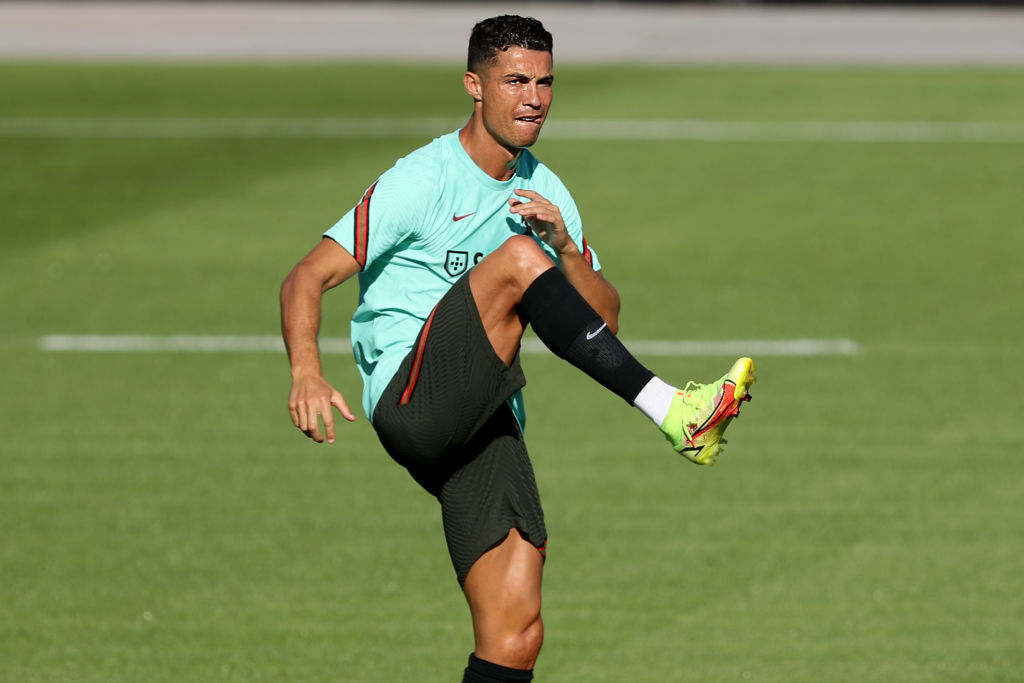 Ronaldo was hogging the headlines at the tournament even before he kicked a ball after launching a tirade against Manchester United and their manager Erik ten Hag.

Portugal's forward #07 Cristiano Ronaldo takes part in a training session in Qatar. His nation will face Switzerland in Tuesday's Round of 16 football match. PHOTO / Getty Images

DOHA, QATAR: Cristiano Ronaldo will aim to fire Portugal past Switzerland and into the World Cup quarter-finals on Tuesday as Morocco bid to derail Spain’s bid for a second global crown.

Just two last-eight slots remain to be filled in Qatar after five-time winners Brazil swatted aside South Korea 4-1 and 2018 finalists Croatia squeezed past Japan via a penalty shoot-out.

Ronaldo was hogging the headlines at the tournament even before he kicked a ball after launching a tirade against Manchester United and their manager Erik ten Hag.

Following an exit by “mutual agreement” he is now seeking a new team, with sources saying he is in talks over a blockbuster deal with Saudi club Al-Nassr.

The 37-year-old superstar forward, who is appearing in what is almost certainly his last World Cup, has been a shadow of his former self in Qatar despite all the hype.

After scoring a penalty in his team’s opening clash against Ghana to become the first player to score at five World Cups, he has huffed and puffed but has failed to find the net again.

Ronaldo’s starting role in the team remains a hot topic among Portugal fans, but coach Fernando Santos said he was not paying attention to the raging debate.

“I do not read this type of material,” he said. “It is not a lack of respect, it is simply that we have three days to train for a game and I am not looking at other kinds of news. We focus on the upcoming match.”

Santos said he expected a close contest against Switzerland. Portugal beat the Swiss 4-0 in the UEFA Nations League in June before losing 1-0 in the reverse fixture.

Morocco are the sole remaining team from Africa, and the only Arab team left in Qatar.

Coach Walid Regragui has urged his men to believe they can defeat powerhouse Spain as they attempt to reach the World Cup quarter-finals for the first time in their history.

“We’ll come out swinging,” said Regragui. “We want to hoist the Moroccan flag way up high. We’re playing first and foremost for us and our country.

“All Arabs and Africans, we want to make them happy. We want their prayers and we want their support so it can give us that extra ingredient to win. Before it was just the Moroccans that supported us.”

Spain started the tournament with a swagger, smashing seven goals past Costa Rica before a draw with Germany and a defeat against South Korea.

Coach Luis Enrique said he set each of his players the “homework” of practising 1,000 penalties ahead of the World Cup, saying he is convinced they are not a lottery.

Super-fired Brazil with Neymar back in the team put on a first-half masterclass on Monday against South Korea, rocketing into a 4-0 lead in the 36th minute, including his goal from the penalty spot, the second of the night inside 10 minutes.

Korea pulled one pack through Paik Seung-ho pulled with a thunderbolt but his side were outclassed on a disappointing night for Asian football.

Earlier, Luka Modric’s Croatia did it the hard way against Japan, coming back from a goal down to equalise before winning 3-1 on penalties.

Goalkeeper Dominik Livakovic was the hero for Croatia, saving three penalties in the shootout.

Seven of Croatia’s past eight knockout games at major tournaments have gone to extra time, the only exception being their defeat in the final by France in Russia four years ago.

Brazil will face Croatia in the quarter-finals on Friday, with the Netherlands taking on Argentina on the same day. England play France on Saturday.