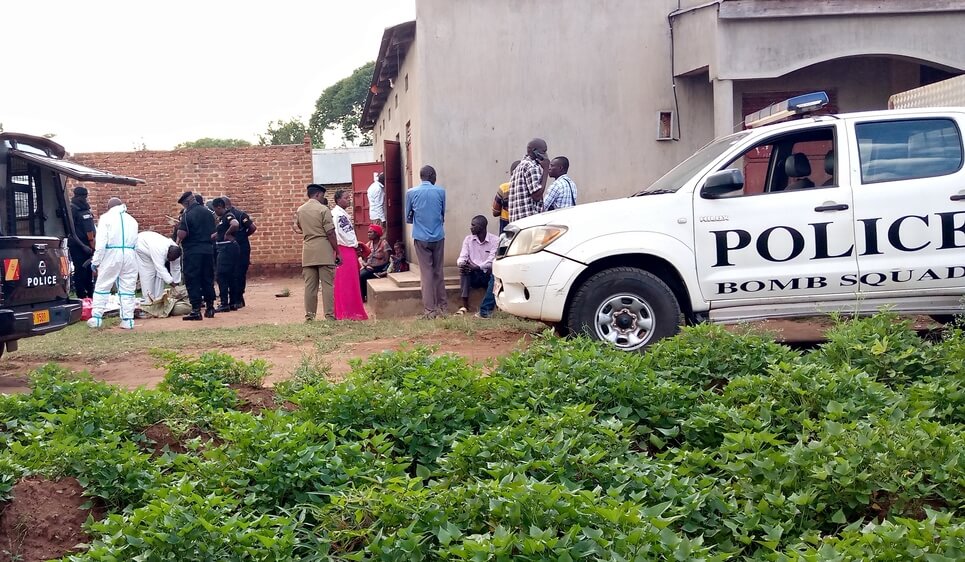 IGANGA, UGANDA: The police in Busoga East in partnership with security operatives from Kampala have arrested a suspected Allied Democratic Forces (ADF) rebel in Buseyi A village, Nakalama sub county in Iganga district.

The suspect whose identity was vividly concealed by police for security reasons was arrested on Monday, January 02, 2023 in a joint operation carried out by security organs in the district. The suspect is a male juvenile between 15 to 20 years of age.

“The joint security team of Busoga East together with manpower from Kampala were able to arrest a man suspected to be a member of ADF rebel group,” ASP Asiimwe said.

According to Asiimwe, “after arresting the suspect, a search was conducted in the house where he was residing and an assortment of exhibits that are related to bomb making were recovered including small cut particles of iron bars, some wires and other bomb making materials.”

Residents who responded at first place says that the suspect was brought at the scene in a vehicle by security team before conducting a search in his rented room where bomb assembling items were recovered among other things.

Among the items recovered included small sized piece of iron bars which were in sacks, metallic boxes in which bombs are assembled, some wires, radio calls and others.

Preliminary investigations from police indicate that the suspect is linked to a number of terrorism incidents that have been happening across the country especially attacks on police installations, private security organizations where a number of guns have been stolen and some lives lost.

However, Daily Express has learnt from anonymous sources that the suspect was one of the armed group that attacked one of the police stations in central Uganda and he confessed killing a police officer by shooting him twice in the chest. This was during an early interrogation conducted on Monday morning during the search exercise.

After the interrogations, police rescue team was engaged to enter a pit latrine where an exhibit of a motorcycle number plate was recovered. The number plate which was wrapped in a cloth resembling UPDF uniform, was a half piece and security couldn’t recognize other figures by press time.

After conducting a search and collecting items of evidence value, the suspect was reportedly taken to Kampala by security operatives. He was taken along with some people to help police in their investigations.

The chairperson Buseyi A village Mr Waiswa Ismael says he was called at around 9am for an operation. He says that the suspect was renting on the house of Taligola Timothy, a UPDF soldier. It is reported that some security operatives were in the area two weeks ago while hunting for the said suspect.

“I was called at around 9am before the operation at the house of Taligola Timothy. But recently like two weeks ago, security operatives came to my place with photos on their phone asking if we knew the person in the photos. We didn’t know him and I personally don’t know him, it’s my first time to see him,” Mr Waiswa said.

Ms Namilimo Charity, another resident says that there is need for LC1 chairpersons to have an eye for their villages and fight acts which may cause bloodshed in their areas. She commended government of Uganda for always arresting the bad elements in the society.

Meanwhile, RPC Asiimwe said that thorough investigations are ongoing before advising the general public to always be vigilant and report any suspected criminal to their nearest police station. He advised landlords to introduce their tenants to relevant authorities for record keeping and follow-up just in case anything happens in future.