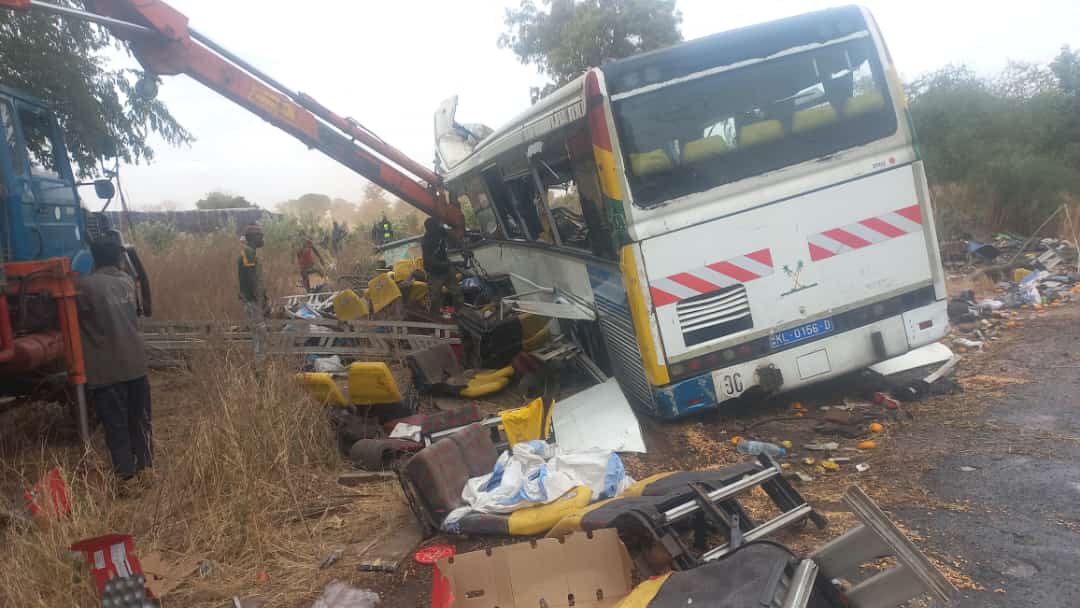 Images of the tragic incident showed the completely mangled front end of a white bus, with blood-flecked seats, personal items and a shoe strewn around the tree-lined crash site.

A general view of the scene of a bus accident in Kaffrine, central Senegal. AFP Photo

At least 39 people were killed and more than 100 others injured when two buses crashed in a head-on collision overnight on an arterial road in Senegal’s central Kaffrine region, President Macky Sall told reporters Sunday.

Images of the incident showed the completely mangled front end of a white bus, with blood-flecked seats, personal items and a shoe strewn around the tree-lined crash site.

Road accidents are common in Senegal, largely because of driver error, poor roads and decrepit vehicles, say experts, but the latest disaster has caused one of the heaviest losses of life from a single incident in recent years.

Speaking to reporters, Sall corrected an earlier government statement that had put the death toll at 40, citing a miscount at the morgue.

He made the comments after visiting the crash site, on the No. 1 national highway just outside of the village of Sikilo, and speaking with some of the injured at the regional hospital in the nearby town of Kaffrine.

“We note with great pain and sadness the death of 39 people in this traffic accident near Kaffrine”, Sall said.

“We have lost many young people in this accident and tomorrow the Prime Minister will convene an interministerial council that will involve the world of transport — transporters, drivers, insurers, security services — to look at the measures to be taken”, he added.

The government has announced three days of national mourning beginning Monday, with flags to be flown at half-mast throughout the country.

Kaffrine mayor Abdoulaye Saydou Sow, who is also the Minister of Urbanism, said in a statement that the accident occurred between 2:00 and 3:00 am (GMT and local) Sunday and was caused by a burst tyre.

He said the Kaffrine morgue was “saturated” and that bodies were being sent to another morgue in Kaolack, a city 40 miles (65 km) away.

Public prosecutor, Cheikh Dieng, had previously said in a statement that early investigations suggested a public passenger bus suffered a burst tyre and swerved off course.

It then crashed “head-on with another bus coming in the opposite direction”, he said.

Sow said he and several other ministers had visited the injured in Kaffrine and Kaolack on Sunday.

The president of the National Assembly, Amadou Mame Diop, said in a statement that he “and all the Members of Parliament share the grief of the entire Senegalese people” and commended “the rapid response of the emergency services”.

Opposition politician Ousmane Sonko announced on Twitter that he would postpone a scheduled fundraising program in light of the accident.

“We bow before the memory of the deceased, offer our very sincere condolences to their grieving loved ones and to all Senegalese and pray for the merciful rest of their souls as well as a speedy recovery for the injured”, he said.

France’s Minister of Foreign Affairs on Sunday conveyed her condolences to her Senegalese counterpart, the French ministry said in a statement.

In October 2020, at least 16 people were killed and 15 more injured when a bus collided with a refrigerated lorry in western Senegal.

Local media said at the time that the truck was hauling fish to Dakar.