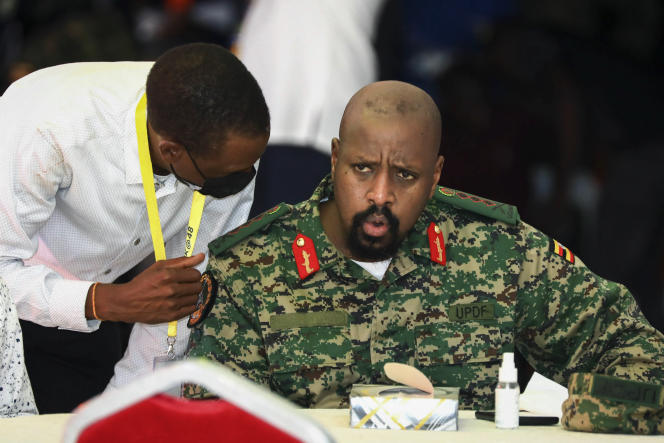 Look at it this way, if Muhoozi is undermining the President as its put out there, why hasn’t he, (Museveni) as Commander in Chief of the Armed Forces acted to stop him? We all understand that as a member of the UPDF High Command, Muhoozi could be tried by the military court martial had the CIC wished so.

The avenue that has superbly propelled the first son atop the coveted ladder. TWEETER has earned him both lovers and haters, almost in equal measures. His rants on the microblogging social network have thrown his attitude, personality, judgement,  intentions, political strategy and professionalism as a serving UPDF officer under acute scrutiny.

One thing that remains as clear as day follows night is that the strategy has, so far, delivered according to plan. It has sold him deepest into the minds of Ugandans whom he will have to turn to in the event he actualises his rumoured political ambition at any given time. The media has unconsciously taken up the role of chief herald for the amazing General,  pushing him further deep down villages at no cost.

Some critics who are understandably frightened by his surge has desperately tried to mudslide him, with many insisting his activity on Social media is driven by a political misdirection.  Ridiculous! We shall find our anyway.

So, is General Muhoozi mad?

Unfortunately,  the first son’s canny approach has swept his house in the confusion along. We have seen many, even within NRM pushed into this type debate on Muhoozi seemingly trying to undo his father out power. With all due respect,  I understand the emotions of those scared of the Muhoozi as and the way he is approaching things in a completely alienway.

Look at it this way, if Muhoozi is undermining the President as its put out there, why hasn’t he, (Museveni) as Commander in Chief of the Armed Forces acted to stop him? We all understand that as a member of the UPDF High Command, Muhoozi could be tried by the military court martial had the CIC wished so. That indicates clearly that the Head of State doesn’t need any outside help were he involved in any sort of disagreement with General Muhoozi. It’s sadists in the opposition that have been fueling the speculation unaware that it serves the interests of the government in power against theirs. If you are to look keenly at the events of recent, the debate has drastically shifted from Museveni-Bobi Wine/ Opposition to Opposition- Muhoozi, keeping attention off the government.

Also important to note is the fact President Museveni has the keys in his hands for any possibility of a political participation.  As a serving army officer, Muhoozi can only  be cleared to contest for the presidency upon clearance by the military High Command which is headed by Museveni himself.

Muhoozi, thus, knows clearly that offending his father can not be a way forward for him and unless he(Museveni) himself backing his son’s behavior and conduct, there could be a lot in the background that meets the eye.

Muhoozi, over the years has demonstrated immense capabilities to lead the country.  For starters,  the First Son, unlike many children from powerfully insanely propertied families has not been individually implicated in stupid scandals as a person and as a serving officer of the Army. This has made his critics look completely clueless as they desperately try to tag him to misdeeds committed by some other members of his family or the government.  Besides,  the temptation that usually bedevils those close to power to grievously enrich themselves much to the chagrin of the common person is not something to accuse the Tweeting General of. That has seen his haters scratch heads endlessly to find ways of staining the sparklingly stainless General with where there is certainly none.

Will Muhoozi be President after General Museveni? Well, I can not bet with certainty since nothing stays constant at all times. What I am sure about though is that he is immensely able and should he opt to throw himself in the fray at any times, challengers will surely have an adventure to forget. But this is not certainly going to be in the near future since his father still commands unrivalled popularity among Ugandans and would win with much ease as he has always done should he want another time as are the prayers of the majority in NRM.

General Muhoozi, without any doubt remains Museveni darling son of whom he is proud. At the young General’s 48th birthday party hosted at State House in October last year, President Museveni backed his son to stamp corruption out of Uganda seemingly projecting a success rate higher than his own. He also named him as his avenger,  further telling how trusted the former Commander of the Special Forces is before his father.

For those of us gifted with patience,  we are destined to enjoy the next phase of
our politics with a clear prospect of witnessing both Muhoozi and Museveni taking an identical political direction.

The intensity of the debate on who will fit well in the footsteps of President Museveni huge jut understandable. Over the last nearly five decades, since the FRONASA days, General Museveni has set the bar way too high for anybody that will seek to step forward as Preaident after he opts to step down. He has drastically modernised the economy from the shambles of the previous misrule, enhanced security and stability hence allowing the population to concentrate on productive activities to for enhanced development. Social economic transformation of the population had been another milestone for which President Museveni deserves more applause. With his exciting concentration on the idea of political integration for East Africa, and Africa as a whole, we can clearly see why the time for him to hung his boots up should not be now, not even in the near future. And so, we shall continue praying for his good health so as to continue profiting from his immense talents.

MZEE pakalast, but Muhoozi could be the future.

The writer is the Deputy RCC Soroti East Division.