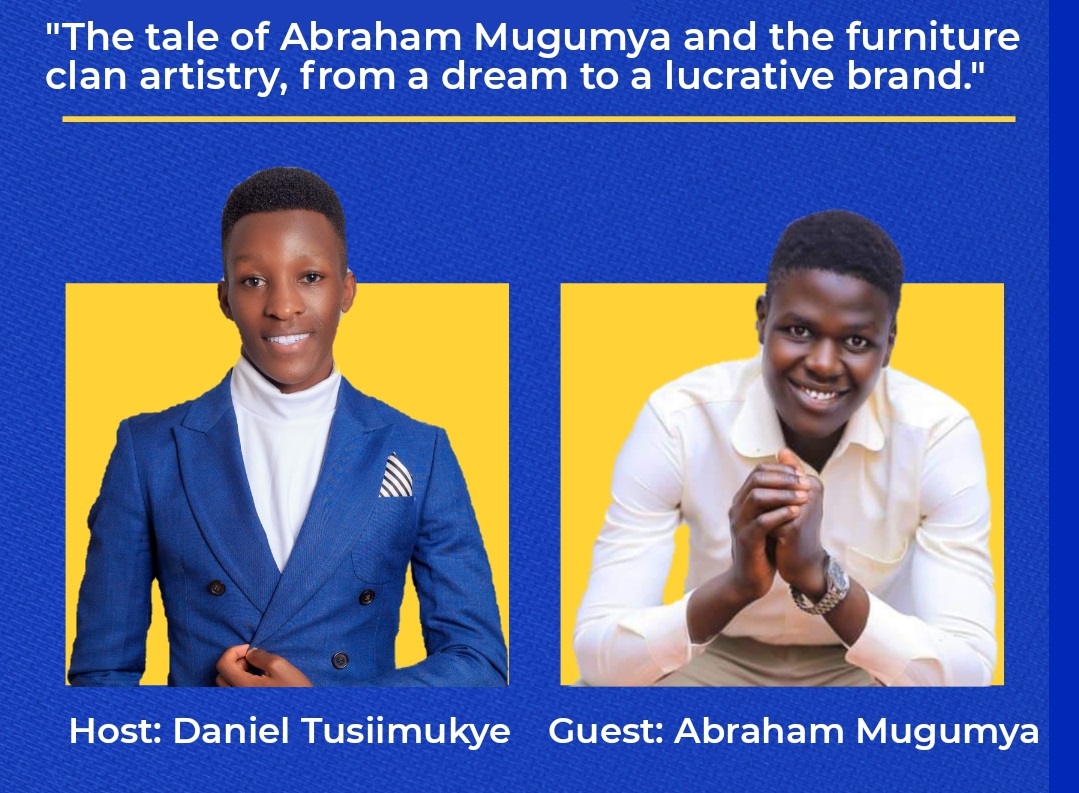 Mugwanya advises the youth to start as early as possible and learn through the process by stepping out of their comfort zone and knowing that it’s okay to fail, and only one that tries fails.

This week in The Youthful Friday, we feature the treasure of finding passion in art and craft and today, I tell you of the tale of Abraham Mugumya and the furniture clan artistry, from a dream to a lucrative brand.

Whereas the art and craft industry still remains a no-go field to many, for Mugumya, it’s a lifelong passion. As my mentor tells me, discipline breaks more barriers than hard work.

“What keeps, me going is the love to create a cooperate brand much bigger than myself, one that will outlive me and impact people positively by giving them skills and economic support.” Says Mugumya.

Mugumya, 23 is the founder of The Furniture Clan Artistry and is in his final year at Makerere University pursuing a Bachelor’s degree in Industrial and fine arts.

Having spent most of his childhood days with his lovely granny, Mugumya’s love to create has been a strong basis for an entrepreneurial life.

He attended Bishop Stuart Demonstration School and St. Theresa primary school in Naalya for his early school. Later, he joined Ntare School for his O’level and scored Agg 23. He joined A’level at St. Henry’ college Kitovu and completed his exams from Valley College Bushenyi where he was the second-best student with 15 points.

All his life, he has been passionate about art and choosing what to do was not hard. “Growing up I’ve loved creating as I was also in the robotics club and my contributions were felt. My love to create has been a strong basis for my Entrepreneurial life as I only added a monetary reward to my creating,” says Mugumya.

Being a student and balancing work has been so challenging but Mugumya has been able to sustain the company for a year so far where he has bought more machines and expanded into metal fabrication from the profit saved.

On how all this has come to him, Mugumya says. ”For this, I really want to be honest, I can sum it up by saying luck fell on a prepared mind.

From high school, I had been doing portraits and art pieces which earned me some upkeep but as I joined campus, I realized I needed much more than my portraits could give. So I started brainstorming and developed a saving spirit but deep within I knew I couldn’t save what I didn’t have. I really needed a source of income more stable than my portraits.”

Blending passion with what he has learnt at school, he has been able to become the master of his craft.

Having used 7 million as start-up capital, he claims that he continues to learn every single day. The furniture clan artistry has skilled him and helped him grow in so many aspects.

The fourth child, that’s how he settled into furniture art, just after trying and failing at many businesses.

“I tried a chapatti stall but things were not good. Frustration and disappointment were a lot. From my portraits, I had managed to buy 2 goats and save a little. After my chapatti business failed, I decided to read a bit more and find so as to increase my chances.

This was all before the fateful day. One afternoon I decided to seat at my school gallery after I had finished my painting, at around 4: 30 a gentleman walked up to me and asked if I could help him find someone to make prototypes of teeth models for him.

We had just been introduced to a few media in sculpture which included wood, plaster and clay. I told the gentleman that is now a dear friend Mr Francis that it was a matter of him explaining what he wanted and I’d have it done for him which he agreed to.

He wanted prototypes of human teeth and despite having never done anything like this before I dared to assure him that I’d pull it off which he agreed to.

With the help of a friend Mr Kazigye, I was able to pull it off. A few months after I was asked to quote for 15000 Shs. pieces of the prototypes, I already had a recipe for my portrait company which was not registered but made me look formal and organized. I quoted 15000 Shs. per piece but we bargained to 12500 Shs. per piece.

Money was promised to be deposited into my account but later, I received a call that I couldn’t get the contact because they had found a Chinese supplier that would deliver better quality, at a cheaper price and in less time. This call found me home in Mbarara, it was during the COVID pandemic and instead of being idle, I had decided to lay bricks with Edson my little brother.

The call left me sad, depressed and cursing. During the time I was laying bricks, I was also part timing house painting which I did every single day. I told grandma about it, she felt sad for me but told me that God would make a way so I should not be so sad which was easy because I believe in God and my days were so busy and tiring.

After about a month as I was still making bricks and had finished the painting contract, Mr Francis called and asked if I had seen the money, I asked him what money and he said for some reason they had chosen me for the contract, it was too real to believe and the message had not come so I thought it was a joke which I laughed away.

He told me to call him soon as I got the money which I agreed to. I checked every message after that and after like 3 hrs I received a message that my account was credited 14,000,000 Shs. Excited as I was, I called and confirmed with Mr Francis.

I remember running all over the whole place jumping that my story had started coming up. From profit and experience, I founded the furniture clan artistry.

I used 7,000,000 Shs. to start, I used the money to buy machines, pay rent and skilled labour from which I learned and buy material.”

In a digitalised age, computers came to save us all. With research, Mugumya has a ready market for furniture, bespoke, affordable and on time. He also does digital marketing having registered his business on Google. This has eased his work.

On how he has sustained his culture for a year, Mugumya says. “I have been able to add more life by being honest, using quality inputs, getting personal with clients and having a bond which helps me get recommendations.”

Most of his products are marketed by recommendations and online on Jiji, WhatsApp, Instagram and Tik Tok. He also does display at the workshop.

Mugumya who plans to grow the company to be a one-stop shopping centre for metal and wooden furnishings stresses to have many challenges. “Machines are expensive; the workshop was raided and completely broken down in its 5th month of establishment before it could even stand. We lost a lot but kept moving forward.”

He calls on the government to support start rather than trying to suffocate them with high taxes such as registration.

He also advises the youth to start as early as possible and learn through the process by stepping out of their comfort zone and knowing that it’s okay to fail, and only one that tries fails.