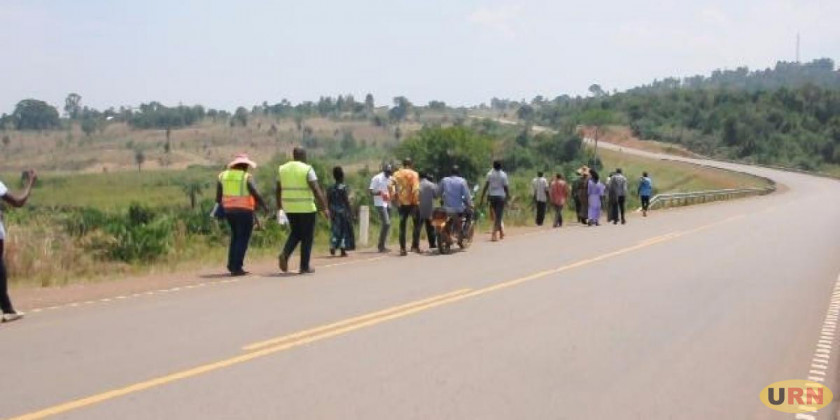 MUBENDE, UGANDA: Residents of Mubende Municipality who were affected by the construction of the Mubende- Kakumiro road have protested against the low compensation rates.

The residents of East Division and Kiyuuni Sub-county in Mubende District claim that some of their properties were undervalued during the construction of the 30km road that was commissioned in 2020. They also allege that some of the properties were not compensated but they were compelled to vacate them to pave way for the road project.

According to records out of the 500 people who were affected by the road project, 113 people were paid money that was not commensurate with the value of their property, while others have not been compensated at all.

Balikudembe Mukasa of Kawulwa Village claims that he was paid 4 Million Shillings for his piece of land measuring 50 by 100 feet comprising of a 2-roomed house that was on the main road. He said that the money was less compared to his building and land.

According to Mukasa, officials from Uganda National Roads Authority-UNRA promised to review the compensation process but have never returned for three years.

Another claimant, Rose Nakibuuka of Muwoko claims that her portion of land measuring 100 by 100 was taken with a house but the money given to her was not proportionate to pay for a 50 by 100 plot and construct a house.

Mukisa Katongole, a resident Muwoko Village, East Division in Mubende Municipality claims that he was paid Shillings 11 million as compensation for his land measuring 50 by 100 feet including a 6-roomed commercial building. He says that UNRA officials have told him to surrender his other house on the pretext that it is in the road reserve yet it was not assessed for compensation.

Katongole says that surrendering his house without compensation would amount to double loss.

The Mubende District Woman Member of Parliament, Hope Grania Nakazibwe said that many people have since complained over undervaluation, and inadequate compensation while others were not compensated at all.

UNRA’s head of land acquisition, Juliet Oyera said that they will look into the grievances and come up with a final decision that would be communicated to the project affected persons.

But Oyera added that they will listen to only the affected persons who have genuine complaints.