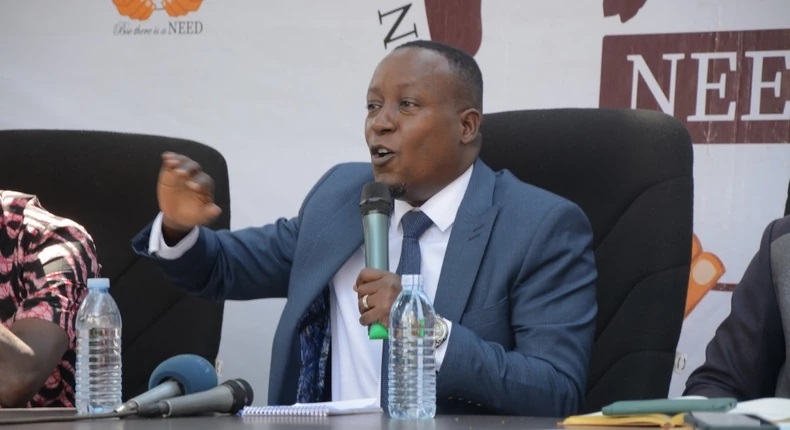 Security Operatives in plain-cloth have arrested the National Economic Empowerment Dialogue (NEED) party leader Mr Joseph Kabuleta and whisked him away to an unknown destination, party officials confirmed on Monday.

The former presidential candidate was grabbed by the operatives in casual wear who showed up at his part offices in Bugolobi, Kampala at around 1 pm, shortly after his weekly press briefing which mainly focused on the recent spate of insecurity in the country.

Sources who witnessed the abrupt arrest say Kabuleta was bundled up and whisked off in a black Toyota Hiace minivan popularly known as a “drone.”

“Two of them entered the gate and grabbed him from his office, while three others stayed in the drone,” the source acclaimed to this website.

The destination and reason for the arrest are yet to be established, although some party officials told this website that he had been taken to the Criminal Investigations Directorate (CID) in Kibuli for further interrogation.

The arrest comes weeks after Mr Kabuleta was summoned to Police to be questioned about comments he made 5 months ago, which police say were divisive and tribalistic in nature.

He was ordered to appear before the Police’s CID Commander at CPS on November 4, 2022, but did not show up, for undisclosed reasons.

It should be also be noted that in June this year, armed security personnel clad in civilian clothes raided Kabuleta’s offices and briefly detained his colleagues but didn’t find him and he had been critical about a number of issues including; vaccination of children in schools against Covid-19 and other diseases.

Kabuleta in his comments then claimed that the vaccines have adverse effects on human beings and also cause death to some people, allegations that both the government and World Health Organisation refute.