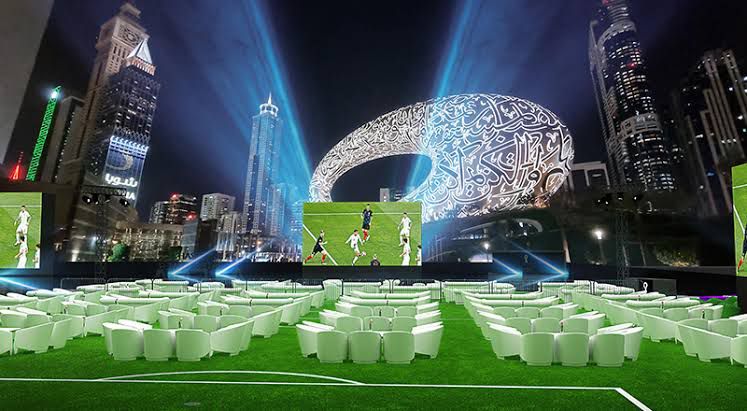 With designated fan zones already open up across the emirate, Dubai, which also has strong ties to the host nation attracts soccer fans from all over the world for the FIFA World Cup Qatar 2022.

Sheikh Mohammed bin Rashid Al Maktoum expressed excitement about the Middle-East region hosting the World Cup. Through a tweet on his official Twitter Handle, he said; “Today I witnessed the opening ceremony of the World Cup. Historical moments our region is experiencing, hosting the most important event in the world. Doha will be the capital of world sports for a month from today. May God protect it and bring [Qatar’s] people and leadership all the success,”

With designated fan zones already open up across the emirate, Dubai, which also has strong ties to the host nation, is prepared to host soccer fans from all over the world for the FIFA World Cup Qatar 2022.

Residents and visitors can watch the action live from Doha at a variety of locations that have been earmarked especially for the event.

Football-themed areas, lounges, and parks have been created on multiple properties. The park has 30 enormous screens installed, and games will be aired until December 18 with live pre- and post-match analysis from football analysts.

First-come, first-served policy governs the availability of tables at DIFC Football Park. 10,000 spectators can be accommodated per day at the BudX FIFA fan park at beautiful Dubai Harbour during the tournament.

Built to suit the season and satisfy the increased demand for accommodation, the 533-room capacity football-themed hotel, NH Dubai the Palm is now open with a sports bar dedicated to fans wishing to get access to the tournament.

Situated on the western side of Palm Jumeirah, is a completely new addition to the Dubai hospitality landscape. Prior to the games, Dubai Customs finished making Al Maktoum International Airport and Dubai Logistics City ready for travellers and flying freight.

These are in order to guarantee that the greatest facilities and services are offered for the smooth, rapid, and effective movement of spectators, guests, and teams sporting equipment during the games.

Juma Al-Ghaith, Executive Director of the Customs Development Division at Dubai Customs, on inspection at the Airport, he said “Dubai Customs plays a vital role in supporting regional and global events hosted by the region.

The World Cup 2022 is an opportunity for nations and peoples to interact and communicate. For this, we vehemently stand behind this renowned tournament to ensure its success through hosting the visitors and fans and facilitating their movement from Dubai to Qatar.”

The Dubai police has urged football fans to respect local laws as they chant for their favourite teams for the FIFA World Cup 2022.

In a tweet, it stated “Dubai welcomes you during the World Cup… enjoy our city of tolerance and openness and take part in our thriving international community. We invite you to express your excitement with respect to local laws and community.”