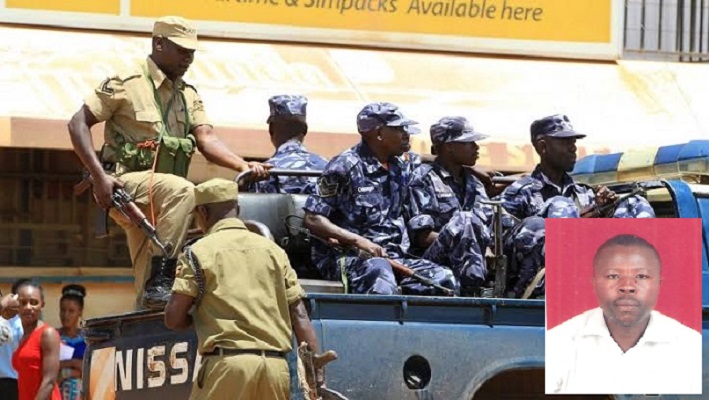 Research conducted by scholars shows that majority of Ugandans statically about 80% are unaware of the basic roles performed by the Uganda Police Force (UPF).

FILE PHOTO: Uganda Police officers on duty. Inset is Steven Masiga, the author of this report

Research conducted by Makerere University and other institutions like the Good Governance centre in Mbale found that the majority of Ugandans statically about 80% are unaware of the basic roles performed by the Uganda Police Force (UPF).

Many times when citizens commit crimes you find them rushing to priests or cultural leaders to report capital offences which are supposed by handled by police and other law enforcing bodies like the Director Public Prosecution (DPP) and the Inspectorate of Government (IG).

There is no settled evidence on where crime may have originated from, however, it is easier for us to trace it to the first humans in the garden of Eden, it is said that when God created Adam and Eva including the talking serpent they disobeyed God, s instructions when he placed them in charge of the garden of Eden and left them with very strong instructions not to engage in certain tasks, unfortunately, they engaged in acts that annoyed the creator up to this day.

In Uganda, the constitution and other statutes like the police Act cap 303 including the public order and management Act imbue the police with very wide-ranging enforcement powers in order for them to execute their roles meaningfully, after all a policeman without authority is nothing perhaps the question here is what is authority? President Amin sometime back  in the 1970s is said to have tasked Makerere university professors to define for him what power was, each professor tried to justify his definition of what  power is  on some known philosopher at the end of the futile attempt, Amin pointed to a military jeep packed nearby and said that is power.”

The definition of power may vary from person to person, to David in the bible a stone for Goliath was his power and to a policeman, a gun is his power to prevent crime.

The Uganda policing laws as seen in Act cap 303 grant them a lot of powers to do their work as officers of the law however just like the same sun that hardens the clay also softens the wax there are very severe punishments reserved for police officers who act contrary to the law ” discipline is always the soul of every force”, a reasonable percentage of the public are unaware that Parliament has enacted very stringent punishments for members of the police force, ranging from demotion, punishment for spreading harmful propaganda, punishment for supporting mutinies, punishment for releasing a prisoner without authority, causing loss to government among others.

There are also other punishments available to police officers such as punishment for disobedience to lawful orders, punishment if found malingering or feigning sickness, drunkards, violence to superior officers and also superiors can be punished for being too rough to their juniors, forgery of documents including scandalous conduct as it were with the late  ASP Muhammad Kirumira, unfortunately, many disciplinary proceedings take place within the force,s courts established at various levels from District, region up to headquarters, and members of the public may be unaware about all this, behind the scenes policemen face severe punishments for playing around with their duties.

The main mission of the Uganda police in Uganda as per Art 2011 of the Ugandan constitution is to secure the life and property of Ugandans, in a committed and professional manner in pattern ship with the public, it is common knowledge that police leadership has continuously encouraged the members of the public to take advantage of the above mission statement of the police, in order to help the country reduce on crimes rates, the force,s core role is to maintain security within Uganda, protect life, property and other rights of the individuals including preventing and detecting crime among others.

To execute the above roles to an expected degree the public ought to be engaged in crime prevention, many of these police functions are spelt out in both the constitution and police Act among other enabling legislations.

The earliest proponent of community policing Robert Peel argued police not to resort to the use of force reasoning that when police use physical force public cooperation diminishes. This precaution by  sir Roberts is not in isolation less in support of Sir Roberts’s principle, Makerere university school of liberal arts in its study on crime in Mbarara municipality also cautioned police officers not to use police structures for intimidation, which is likely to lead to mistrust and suspicion and hence undermine the philosophies behind community policing,

Relatedly both the criminal procedure code Act and the Police Act have timelines on when force should be resorted to, junior officers normally want to use commands or force in order to be felt, and this too can be corrected.

There are ample techniques in community policing which among others include, the creation of neighbourhood watch groups, increased use of foot patrols, and town hall meetings. The Uganda police have a very good scored card on community policing through town hall meetings, recently bugisu region police leadership had a successful town hall meeting with residents of Bumasaga ward trained on how to eliminate crime in their ward and these efforts on community policing are allover Uganda thanks to the able leadership of IGP Ochola. As a lawyer, the IGP knows the effect of crime on communities, crimes militate against development insists ACP Rubanza the Elgon police surgeon, some resident district commissioners are very supportive of this arrangement since the government has a duty to secure the lives of all Ugandans, political parties aside, community policing is now a visible scene across Uganda, in regions of, Bugisu, Kigezi, Ankole and across Karamoja, including Acholi region.

In policing parlance, the police have a number of roles, firstly they must deal with policy and operations issues for example procurement of tear gas is a policy matter but when and how to use it becomes an operational issue which should depend on proper guidance after the commanders have made clear evaluation of the situation, then there are issues to do with enforcement does the police enforce the law ,or rules, the answer here is in the affirmative ,police enforces  rules and laws including directives,for example  a driver from Bududa district can be arrested for over speeding, in over speeding he is breaking the traffic rules. The  road signs are rules that all road users must adhere to  ,legal rules are technically normative in that they make conduct obligatory, therefore breach of rules become the reason for punishing the offender ,in pushing the offender the judge takes the rule as his guide and breach of the rule as his justification and reason for punishing the offender,the above analogy shows the nexus between courts and police,they work hand in hand since they are the ones in charge of enforcement of courts orders ,very few people still fathom the role of resident district district commissioners in police matters,the National security Act grants them some security related powers by virtue of their roles as security heads in the District,but closely following within the footsteps of the president under Art 98(1) where the head of state is the commander in chief of all armed forces,thus his delegates being commanders in chief in their various districts is not very harmful,many of the RDCs are seen on a number of  occasions  in both army and police camouflage uniforms

Many politicians especially opposition learning politicians have accused the police of being used as “a walking stick “by the executive or the president to be precise, there are also internal tears recently minister for internal affairs Rtd Maj General Kahinda Otafiire cautioned police over their working methods.  Of course, the police can’t disobey say the president since constitutionally he is their commander and many senior officers are promoted by the president on the advice of the police Authority any in opposition once in power cannot run from commanding the police.

Secondly, heavy punishments await any policeman who frowns upon superior orders and instructions ,a view almost colloquially shared by the internal affairs minister when he argued policemen not to rush to arrest, but should rush to investigate first, after the law allows them to first detect crime than rushing to arrest maintains prof Kiboma of Islamic university in Uganda, the nature of politics in Uganda and elsewhere in Africa makes opposition politicians appear like enemies of the state, this mindset can still change with continuous engagement of enforcement actors,a though and critical analysis of police roles reveals that some of the uncouth acts by some policemen are not supported by any Ugandan municipal law ,but they are thus individual actions that police management irons out by disciplining the errant officers.

Dwindling crime rates, every other year, police crime statistics show that crime rates are dwindling massively due to proper policing and increased reporting of crimes, while other crimes are below the belt, people choose to ignore reporting or because the cost of reporting the crime is higher, for example where a burglar steals an old shoe or old saucepan, legally crimes can be grouped as either felonies and misdemeanours, including Infrastractions each of this attract different punishments from one year+  and above including mere reprimands by police on class D offences, for example, moving with donkeys in the street, while felonies are very serous indictable offences.

An ocular analysis of this year,s police statistics reveals that crime rates dropped to about 8.9% across the country, a view validated by many studies on community policing, many of these community interactions are just like what sir Robert Peelard advised police should only use physical force. When persuasion and advice are insufficient, the public opinion indicates that most senior police officers have utilised this principle well, the example of the Former prime minister being politely argued by police commissioner Kaweesi to return to Kampala instead of heading to bugisu during 2016 around river Nile is a cardinal example of this Peerlian principle.

Steven Masiga is a researcher and administrator from Mbale