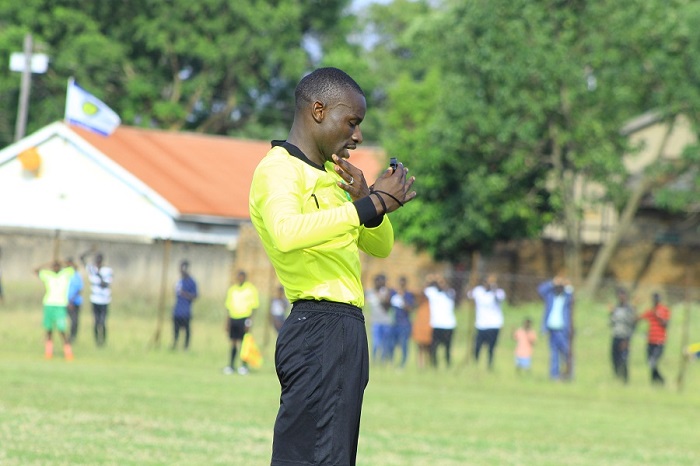 In one of the said matches, UPDF defeated Tooro United 4-2 with the Referee awarding four penalties in the match, two for each side, while the other match ended in a 2-all draw between Gadaffi and Onduparaka

KAMPALA, UGANDA: The FUFA Ethics and Disciplinary Committee has banned referee Mr Kalibala John Bosco from officiating any football-related activity at national level for a period of 15 years after he was found guilty of match fixing.

Kalibala is accused of breaching FUFA Ethics and Disciplinary Code after evidence showed that he received a financial gain in return for influencing the outcome of numerous matches including; Tooro United v UPDF played on November 30 2021 and Gaddafi FC Vs Onduparaka FC played on December 21, 2021.

“The Ethics and Disciplinary Committee analysed the evidence on the file namely; the CAF Match Integrity Report for Match No. 59 Tooro United v UPDF played on 30th November 2021, investigation into Match No. 90 Gaddafi FC Vs Onduparaka FC played on 21st December 2021 as well as his own admissions and established that in the matches mentioned above and on other numerous occasions, Mr. Kalibala received financial gain in return for influencing the outcome of the matches,” the statement added.

In the said matches, UPDF defeated Tooro United 4-2 in Match Number 59, while Gaddafi’s encounter with Onduparaka ended in a 2-all draw. But in the game between Tooro United and UPDF, referee Kalibala awarded four penalties, two for each side. The Federation however did not specify which other parties were involved in the case.

FUFA noted that the decision to ban Kalibala was based on FUFA’s zero tolerance against all kinds of match manipulation and or match-fixing and the need for sanctions to serve as a deterrent to other individuals.

“The decision was based on FUFA’s zero tolerance against all kinds of match manipulation and or match fixing, the need for sanctions to serve as a deterrent to other individuals, the need to maintain the integrity of the sport, and the threat match fixing poses to sports competitions,” the local football governing body said.

”In this respect, the Committee stresses that Mr Kalibala was subject to the strongest sanction the Committee could impose,” it added.

FUFA also stated that further investigations are ongoing on Kalibala’s matter and related cases as reported to them.

In what is seen as a continuation of the match manipulation agony that has for long defined Uganda’s football industry, top club officials, coaches, referees, and players have often been accused of taking part in match-fixing.

In his resignation letter, Sekatawa said that match-fixing and sports betting had marred football in Uganda including top leagues.

Speaking to journalists last month, FUFA President Moses Magogo stated that one of the key issues that his proposed National sports bill aims to address is to stop match-fixing and make it illegal for any football stakeholder to participate in the predetermination of results.

Football stakeholders in this context include, among others, referees, coaches or trainers, players, and football club owners.