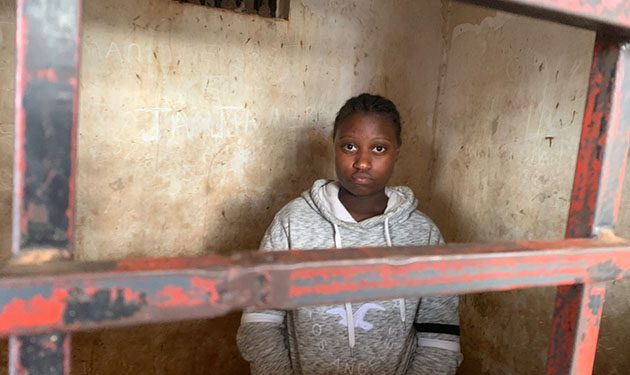 Police in Kampala has confirmed the arrest of one Kafta Queen, the prime suspect in the assault video where three girls appeared beating up their colleague accusing her of allegedly having an affair with one of the girl’s boyfriend.

In the docks: Kafta Queen, the prime suspect behind Nicole's torture has been arrested (Photo/Courtesy)

KAMPALA, UGANDA: Police in Kampala has confirmed the arrest of one Kafta Queen, the prime suspect in the assault video where three girls appeared beating up their colleague accusing her of allegedly having an affair with one of the girl’s boyfriend.

According to Kampala Metropolitan Police Deputy Spokesperson ASP Luke Owoyesigyire, Katfa, 18, who is currently being detained at Kira division police first invited the victim to attend her birthday celebrations before she and other girls at large beat her up.

“One person has today been arrested in connection to the viral video where a girl is seen being tortured. She has been identified as Kafta Queen, 18 and is the prime suspect that invited the victim to attend her birthday celebrations, only to start beating her up,” ASP Owoyesigyire tweeted on Tuesday evening.

The video which sparked mixed reactions on social media shows three girls at the boyfriend’s place first welcoming the victim, before turning against her and questioning why she betrayed them by falling for the unnamed guy in question.

The victim who came later to be known as Pretty Nicole received hot slaps and canes from the Kafta as other females cheered on while pulling the victim’s hair in a violent and inhuman way.

Police had earlier on Tuesday morning confirmed that investigations were underway to have the culprits brought to the books of justice, while the victim was already in the safe hands of the police receiving treatment and further guidance on the matter.

However, to the shock of police officers, the victim (Nicole) allegedly refused to cooperate with them for evidence and follow-up of the case, and instead blamed herself for the predicaments she had gone through.

What the law says

Assault causing actual bodily harm is when one hits another bruising or causing other injuries to the skin. This, according to section 228 of the Penal Code, can land you in prison for up to five years.

The assault that causes grievous harm is the kind that causes an injury that poses threat to one’s life. For example, a fracture of the borne or severe damage to any body organ. This is could earn you seven years in prison.

Whereas if an assault results in the death of a person within a period of one year and one day, you will be presumed to have caused the death of that person and will be charged with murder by the courts of law.