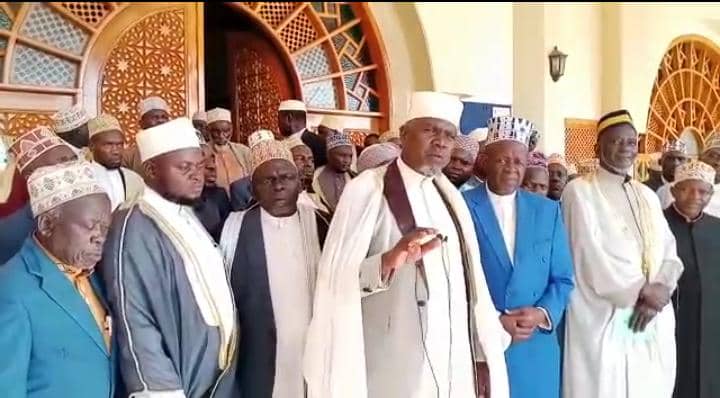 According to the court documents seen by this publication, Mr Basajjabalaba and his colleagues decided to petition court because of the actions of Mufti Mubajje through the UMSC to disqualify him as a candidate for the elections of the chairperson of the general assembly.

The Union of Eastern Muslim Scholars has condemned the disrespect and manipulation of the Uganda Muslim Supreme Council (UMSC) by a clique of Muslims basing on the current state of affairs in UMSC and among Muslims in general.

In a press statement issued by the union chairperson Sheikh Shafie Idris Songolo in a meeting at Old Kampala Muslim headquarters, the union is offended and disturbed by an infamous order issued on January 10, 2023, by the chief magistrate of Mengo Court His Worship Patrick Talisuna Ngereza who tried to freeze the activities of the Uganda Muslim Supreme Council and all its employees from carrying out its mandates. The meeting involved all 78 Muslim kadhis in Uganda.

“The Union of Eastern Muslim Scholars is offended and disturbed with an infamous order issued on 10th January 2023 by His Worship Patrick Talisuna Ngereza who tried to freeze the activities of the Uganda Muslim Supreme Council and all its employees from carrying out its mandate,” Reads part of the statement.

A similar conference transpired at Ibun Baz Girls secondary school, Busei Iganga, during the Union of Eastern Muslim Scholars’ meeting and press conference in condemnation of malice and defamatory sentiments fronted against H.E the Mufti of Uganda and UMSC in general.

The application that arose out of the court order was filed by businessman Hassan Basajjabalaba, Mr Umaru Sewante and Mr Sulaina Kigongo. The Mufti is jointly sued with the UMSC that he heads.

The bailiffs were implementing a directive by the Mengo Chief Magistrate’s Court in Kampala, which on Tuesday (Jan 10, 2023) temporarily stopped the Mufti of Uganda, Sheikh Shaban Ramadhan Mubajje, from carrying out any activities on behalf of UMSC.

According to the court documents seen by this website, Mr Basajjabalaba and his colleagues decided to petition court because of the actions of Mufti Mubajje through the UMSC to disqualify him as a candidate for the elections of the chairperson of the general assembly.

Mufti Mubajje who, by virtual of his position is mandated to chair the first session while electing the chair and his deputy, reasoned that Mr Basajjabalaba was ineligible to stand for the position having been impeached from the same office in 2010.

Citing the amended 2022 UMSC Constitution, Sheikh Mubajje said Article 4 (2) stipulates, among others, that a candidate has to be nonpartisan or/and not holding any political office, never convicted of any criminal offence under the laws of Uganda or has never been impeached by UMSC at any time.

But Mr Basajjabalaba denied being impeached, arguing that the process wasn’t conclusive and that is why there were no certified minutes to prove so.
However, Mufti Mubajje disclosed how subsequent deliberations were carried out since he chaired the proceedings that led to Mr Basajjabalaba’s impeachment before insisting that the businessman was ineligible to contest.

It’s against this background that Mr Basajjabalaba ran to court, claiming he was unfairly been ejected from the race by the Mufti.

The Union of Eastern Muslim Scholars noted in their statement that the Union stands clearly and strongly against such unpleasant orders, and informed its members to disregard the same with all the contempt it deserves.

They also strongly condemned and denounced the framers and all those behind it, citing that it is aimed at creating divisionism among Muslims, undermining the unity and developmental efforts realized by the Council, and further destabilizing the security and stability of the country.

The Union also says the action is tantamount to assault on the sanctity of Islam and deliberate enmity towards Muslims in the country, for which the Union won’t entertain whatsoever pointing out that the dangers of revolting against legitimate leaders are greater than achieving individual gains, and that the loss of some persons in the recently concluded elections should not be an excuse for disturbing the highly cherished unity and harmony among Muslims.

The statement which is signed by Union chairperson Sheikh Songolo, the union further advised whoever feels uncomfortable with the outcomes of the previous elections, to use proper and clear legal means to address their concerns without any sort of violence or chaos before noting the union’s commitment to stand resolutely with the current leadership of Uganda Muslim Supreme Council, and called upon all those who are trying to sabotage its activities, to desist from such acts, and revert to the truth and right path, and further apologize for their misdeeds and the poor impression they caused before the holy month of Ramadan, or else they plead with Allah to have them punished.

The Union of Eastern Muslim Scholars is a registered body that binds Muslim scholars in the country and the Eastern region in particular. Some of its objectives among others is to advance unity of Muslims in Uganda and propagate Islam and its virtues.

Therefore, the Union in their statement considered this act as a blatant interference in the council’s internal affairs, a clear obstruction to its progress in achieving unity among Muslims, and also prevention from realizing growth and prosperity witnessed far and wide in this blessed country under the wise leadership of H.E the President of Uganda, Gen (Rtd) Yoweri Kaguta Museveni Tibuhaburwa.

They also categorically stated that no illegal force or means whatsoever can overthrow the current legitimate UMSC office bearers and that the Mufti of Uganda, Sheikh Shaban Ramathan Mubaje remains the legitimate head of all Muslims in the country before calling upon the Muslim fraternity in the country to remain calm.