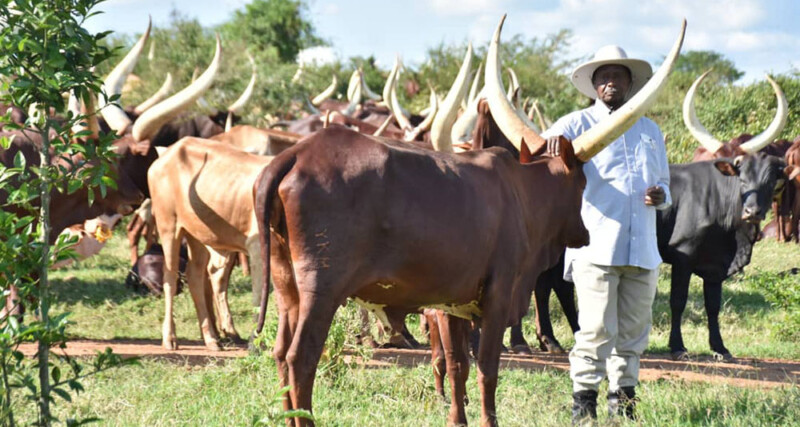 The President offered the cattle to Dr. Margaret Saimo-Kahwa, the lead investigator of the project while closing the three-week new NRM-MPs retreat which has been going on at Kyankwanzi National Leadership Institute (NALI).

Frustrated by the purported delay by government officials to support the project, the tough speaking Museveni remarked; “I really want no more games. I will no longer lobby, I will use my authority to say ‘no’.”

“These vaccines if we get them, we shall solve the problems of Uganda but also get a lot of money. That’s why I said Kahwa come and talk to these people,” he said.

The President emphasised the need to support such projects saying; “other people wanted to take away this project.”

Dr. Kahwa reported that they had been given 300 acres of farm land for the project.

She disclosed that 300 head of cattle were needed to carry out the vaccine trials.

Asked about the total project budget, Dr. Kahwa informed the President that the project which includes the building of a big manufacturing plant requires funding of Sh26b spread over five years.

Makerere recently secured a partnership with Alfasan Uganda Limited to start the industrial production of the vaccine.

This came after the vaccine developed over a decade with funding from the State House Innovations Fund reportedly passed laboratory pre-clinical trials.

Commenting about the project, the University Vice Chancellor, Prof. Barnabus Nawangwe recently bragged that “the 16 years of rigorous research by our scientists have finally paid off. Makerere is finally doing the things we should be doing like all other great universities.

We are joining the league of those universities which do research development not research for purposes of publication and promotion only.”

According to Dr. Kahwa, the vaccine can either be administered orally or by injection. She adds that it will effectively address ticks’ resistance to acaricides, which is one of the topmost challenges to the livestock sector in Uganda.

“The complete dose of the vaccine will be administered twice a year and the cost will be around sh5,000 per dose,” Kahwa said.

The vaccine according to Dr. Kahwa has no negative effects on the meat, its quality and safety to consumers.

Uganda’s livestock population is estimated to be more 40 million animals worth $27b (sh99 trillion).

According to Kahwa, they got the knowledge about the vaccine from their counterparts in Cuba where it has been used for more than 30 years to fight ticks.

The scientists developed the vaccine from proteins found in ticks that are attacking the animals in the country.

“We modified the protein that is found in our indigenous animals. We used technology in the laboratory to multiply the protein artificially.

The protein was then purified using special equipment and tested to ensure purity before attempting to use it,” she said.