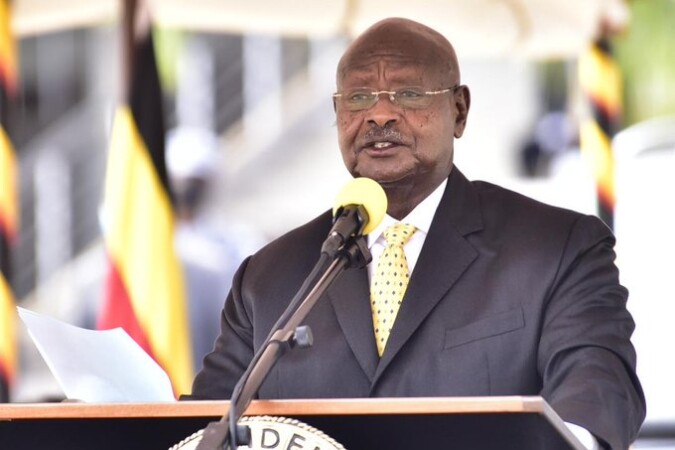 President Museveni has directed payment of a monthly salary for all Ugandan sportsmen and women who bring home a gold, silver, and bronze medal at a continental level, commonwealth, or the Olympic games.

The President said this on Wednesday at Kololo where he welcomed the country’s team that represented Uganda at the just concluded Olympics games in Tokyo, Japan.

“I made an order in 2013 that anybody who wins gold at a continental level, commonwealth or Olympics should be paid Shs5m per month all the time and Shs1 million for silver and bronze. It was not honored,” the President said.

I was told they are being paid quarterly. I didn’t say quarterly. I speak English very well. All their arrears will be paid,” President Museveni added.

Museveni at the same function also promised to build houses for the parents of each of the three medalists for Uganda, Joshua Cheptegei (gold and silver medalist), Peruth Chemutai (gold medalist), Jacob Kiplimo (bronze).

“And because I’m now a happy man because of the medal I will give each of these medalists a car. I will build for their parents a house each,” he added.

The president also chided critics who reportedly said Uganda earned the medals at the Olympics by a miracle.

According to Museveni, whereas Uganda doesn’t have the financial muscle like other countries to give hefty rewards to sportsmen, the vehicles and monthly salary is his small token for the country’s performers in sports.

“It is my small way to support without billions of Kenya. I am busy building the foundation,” he said.

Museveni said that whereas Uganda doesn’t directly inject a lot of money into sports, government does it through other means.

“Someone was saying it was a miracle for Uganda to perform well at the Olympics. This was not a miracle. The sportsmen are coming out spontaneously by themselves but it is because there is peace. Where it is not a miracle is that all this potential is there and has always been there. Why had it not come out before? One of thing that was missing was peace. In the past, the people of Bukwo couldn’t showcase their talent because of being at the border with Kenya and were being raided by Pokot in Kenya and Karimojong,” he said.

According to Museveni, by funding the defence budget heavily, government is indirectly helping sports to flourish.

The president said his “low cost” techniques of recruiting talented youth into the country’s forces like the police, army, and prisons have also contributed to excellence in sports.

He explained that whereas government doesn’t have a lot of money to pay them, by being in the forces, they earn some salary that keeps them afloat.

“I told these people that anyone with sports potential should be recruited in the police and the army so that they have a base like a small salary to allow them to train. That’s why many of the medalists are from the armed forces. It is a low-cost plan on how to maintain and encourage our sports people without using too much money. They get small salary from police or the army,” he said.

“This is just a tip of the iceberg. Uganda will become a big sports country if we implement some of the things we talk about and more direct expenditure in sports.”