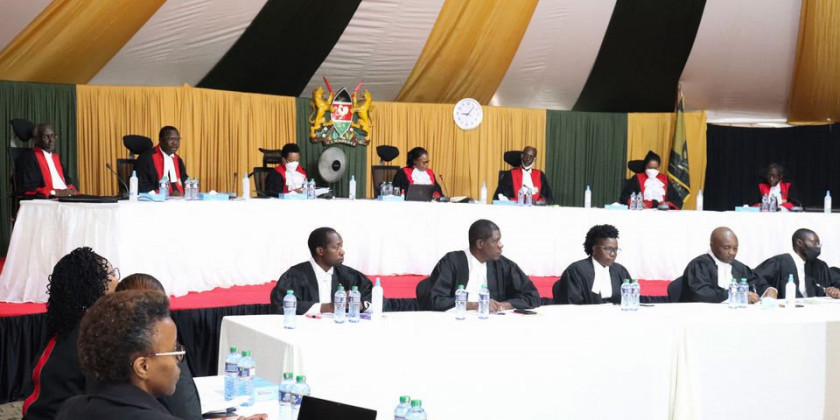 “The constitution amendment bill of 2020 is unconstitutional,” the Supreme Court said in a majority ruling, ending a nearly two-year legal battle over the proposals.

Kenya’s top court ruled Thursday that a controversial bid by President Uhuru Kenyatta to change the constitution was illegal, dealing a blow to him and his allies ahead of key elections in August.

But it left open the possibility for the reforms — popularly known as the Building Bridges Initiative (BBI) — to be submitted again by parliament or through other means, so long as the president did not have a hand in the changes.

“The constitution amendment bill of 2020 is unconstitutional,” the Supreme Court said in a majority ruling, ending a nearly two-year legal battle over the proposals.

“The president cannot initiate constitutional amendments or changes through popular initiative under article 257 of the constitution,” it said.

The reforms would have expanded the executive and increased the number of parliamentary seats, in the biggest change to Kenya’s political system since the introduction of a new constitution in 2010.

Kenyatta had argued that the change would make politics more inclusive and help end repeated cycles of election violence.

Thursday’s decision came after the High Court and Court of Appeal ruled against the proposed amendments last year.

The appeals court even said Kenyatta could be sued in a civil court for launching the process.
But the Supreme Court ruled unanimously against this idea.
“Civil proceedings cannot be instituted in any court against the president or the person performing the functions of the office of the president during their tenure of office in respect of anything done or not done under the constitution,” it declared.

BBI’s detractors — including Kenyatta’s estranged deputy William Ruto — say it is a little more than a naked grab for power by a two-term president who cannot run a third time.

The timing of the reforms spurred speculation in recent years that Kenyatta was seeking to remain in power by establishing the post of prime minister as part of the BBI.

Ruto, 54, was initially anointed by Kenyatta as his successor, but found himself marginalised after a shock 2018 pact between the president and his former foe Raila Odinga, who have a long history of opposing each other at the ballot box.

The pair’s spirited pursuit of the BBI since 2018 sparked speculation that Kenyatta may assume the new position of prime minister in a power-sharing arrangement if Odinga, 77, wins the presidency.

Earlier this month, Kenyatta, 60, endorsed Odinga, who will compete with Ruto for the country’s top job.
Thursday’s session lasted over six hours, with each of the seven judges including Kenya’s first female chief justice, Martha Koome, reading out their respective decisions on the case.

Analysts say the decision will jolt political alignments among smaller parties, which are weighing their options ahead of presidential and parliamentary elections barely four months away.
Already, fresh alliances are being forged, with a view to dividing the spoils come election time.

The BBI proposals are likely to be revived through other means and will provide fodder for the election campaign, said Macharia Munene, professor of history and international relations at Nairobi’s United States International University.

“Each political side has something to claim. The question is, being the politicians that they are, what will they do to trumpet and say that they won,” he told AFP.

Odinga responded to the verdict, writing on Twitter: “We will not stop deliberations on the way forward that will decide on a future course of action.”
Although the ruling is likely to weaken Kenyatta’s hand ahead of the August elections, Munene said the pair will probably promise to bring the BBI back later and use it to secure alliances in the run-up to polling day.
“A lot of people will be told, ‘vote for us because we are going to increase the number of positions’.”

Kenyatta has previously vowed to see the constitutional changes instituted in his lifetime.
“Although it encountered some legal obstacles, I can only say that BBI is just a dream deferred,” Kenyatta said last December.
“One day, someday, it will happen, because the country cannot survive ethnic majoritarianism and exclusion, just as it cannot survive unfair and skewed representation. This is a design defect that we must fix,” he said.