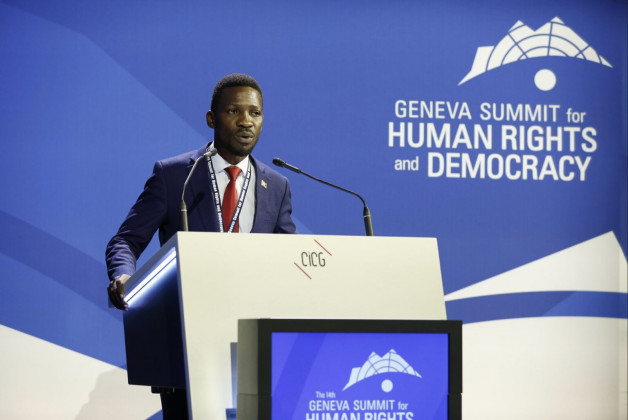 Kyagulanyi took the participants through his political journey where he highlighted a number of challenges he claimed he has gone through at the hands of the ruling government.

KAMPALA, UGANDA: The President of the opposition National Unity Platform (NUP), Mr. Robert Kyagulanyi Ssentamu alias Bobi Wine has declared that he will never give up on fighting President Museveni until his regime is out of power despite losing in last year’s national elections.

Bobi Wine made the remarks on Wednesday during his address at the Geneva Summit 2022 where Democracy and Humanity right were the main subjects for discussion.

In his opening remarks, Kyagulanyi thanked the summit for giving him the opportunity to share his story, which according to him also, represents many Ugandans he says have endured gross human rights Violations for the last 36 years.

The former presidential candidate and runnerup took the participants through his political journey where he highlighted a number of challenges he claimed he has gone through at the hands of the ruling government.

The NUP proprietor particularly pointed out on torture, intimidation, illegal arrests and killings he said he and some of his supporters have suffered at the hands of Museveni’s government especially prior to the January 2021 elections.

“Thousands of our supporters were then abducted by security operatives in unmarked vehicles, called drones in Uganda. As I speak now, many are still missing while others are still in illegal detention, for simply supporting me and our party,” he said.

Kyagulanyi further accused Museveni of ruling Uganda with an iron hand. He said, “He deploys the military against citizens and even students. Those who oppose him are either imprisoned, tortured, or killed,”

Despite all the highlighted challenges, the NUP president said his supporters’ bravery has seen the party rise through the dark-times to put up resistance against Museveni. He added that his party will never give up in its pursuit for the presidential seat.

“We never gave up and we will never give up. It wasn’t just me challenging General Museveni, it was an entire generation and for the first time, there were no tribal lines, no class lines or religious lines. We were speaking as one big voice. The entire population saying “People Power is Our Power.” he said.

Also, Kyagulanyi described the support he received from Ugandans as the biggest public phenomenon he had ever seen.

“I had been a celebrity. I had done hit songs. I knew what it was like to be famous- to have people chanting your name but this was different.”

Under the theme ‘How To Topple A Dictator’, the Geneva Summit shines a spotlight on urgent human rights situations that require global attention.

It gives human rights defenders, activists and former political prisoners a platform to testify about their personal struggles for democracy and freedom, while building an international community to take on dictatorships.