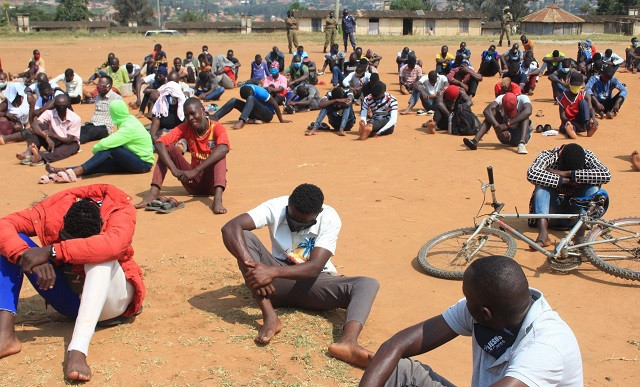 The operation followed outcries by pilgrims whose bags and luggage had been snatched by men dressed like boda boda riders.

KAMPALA, UGANDA: At least 30 suspected motorcycle thugs terrorizing pilgrims in Namugongo have been arrested by covert military and police personnel.

The operation followed outcries by pilgrims whose bags and luggage had been snatched by men dressed like boda boda riders.

The boda boda riders who operate in Kyaliwajjala, Agenda, Mbalwa, Kira and Namugongo said they saw several women crying as they approached the Catholic and Anglican shrines.

This prompted the boda boda riders to suspect that there were groups disguising as fellow riders yet their intentions were to rob unsuspecting pilgrims.

“We were shocked to find these goons forcefully taking people’s bags and luggage. We started picking them one by one and within a short time we had arrested 13. We continued with the operation throughout the night and by morning, we had arrested over 30,” said the senior security officer.

Bosco Buziba, the chairperson of boda boda riders in Namugongo who took part in the operation said when they received information that a group of thugs were mugging people, they decided to work with security to ensure they are arrested.

“I was shocked to hear that boda boda riders operating in my division were stealing from the pilgrims. We alerted police and made sure that we worked with them. We started hunting the thugs on motorcycles who were following pilgrims in and out of Namugongo,” said Buziba.

Musa Bwojji, the local defence in Namugongo one, says that they are determined to deal with groups of gangs that are planning to take advantage of the martyrs day celebrations.

“I want to warn all criminal gangs planning to carry out their criminal activities, that they should prepare to suffer the consequences, because we have prepared ourselves to work with security agencies, to ensure safety and security of all Ugandans who come for prayers on that day,” police spokesperson Fred Enanga said.

On Monday, Enanga cautioned pilgrims and people intending to go to Namugongo to be aware of criminal gangs and scammers that are planning their moves.

In an interview with URN, Abbas Senyonjo, the Kira division police commander said inside the shrine, security was yet to register serious theft, robbery or any other crime incidents. He explained that all the 10,734 pilgrims at the catholic shrines and 830 at the protestant shrines by Wednesday morning had not yet reported thefts because whoever was trying to do that would be picked by covert and overt security officers.

“I guarantee you that their security is in place. We have provided security right away from Entebbe airport. Wherever they are coming from, the commanders are doing their job very well. Commanders have been deployed inside and outside. We have all security agencies inside like SFC, FFP, CT, general duty and other security agencies. We have prepared for any incident,” said Senyonjo.