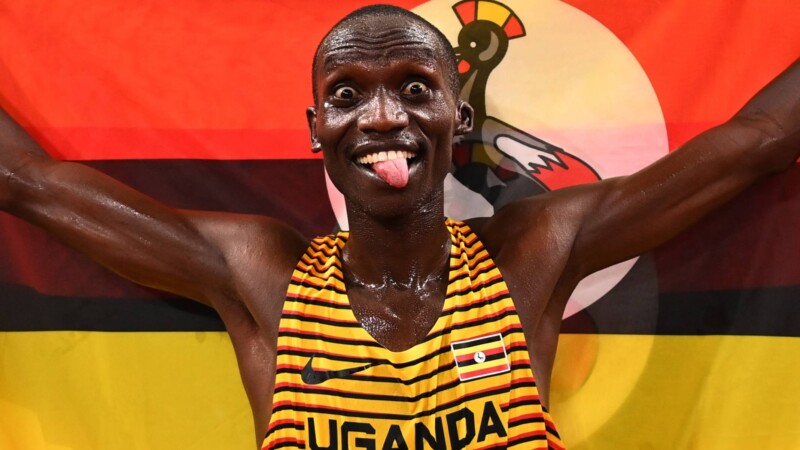 Prior to going into the men’s 5000m finals, Uganda placed its hope in Cheptegei who is the world record holder of the distance.

Prior to going into the men’s 5000m finals, Uganda placed its hope in Cheptegei who is the world record holder of the distance. Cheptegei tried his luck to secure a second world title after winning the 10,000-meter race last week. However, the 25-year-old only managed to finish ninth. His colleague Oscar Chelimo secured a bronze medal for Uganda in the hotly contested race on a Monday morning.

Cheptegei led the pack on the track in the first four laps before Kenya’s Jacob Krop and Daniel Simiu overtook him. This is the only time Cheptegei spent in the podium positions in the entire race and continued fading off as several athletes cruised past him.

However, as he slowed down, he signaled his counterpart Chelimo who was among the last for almost the first 9 laps to soldier on. Chelimo, who was in the second last position towards the last lap overtook almost eleven athletes in the final 400 meters.

Speaking to URN in an interview, Njia revealed that Cheptegei suffered a tendon injury after participating in the 5000m heats, which made it hard for him to have a good display in the finals. “He got a tendon problem in the 5000m heats when they were doing the qualification, when he was racing in the final he told me by the 8th lap he saw it coming, and disturbing him, so instead of him doing a do or die, it would worsen his injury so he had to slow it down,” Coach Benjamin Njia explained to URN.

Asked whether the injury was not threatening before the athlete stepped on the track for the finals, Njia explained that Cheptegei was feeling pain. “He was not really okay, he was already having it, he would feel a little pain, but he had nothing to do,” the coach argued.

The long distances runner will have to step on the track again later on August 2nd, 2022 to defend his 10,000m commonwealth title in Birmingham. Asked whether the injury will not affect his chances as he heads to the commonwealth games, Njia replied that the technical team will assess him before going to Birmingham.

“We shall wait for him to return so that we can assess him, he will be arriving here either today or Wednesday,” Njia told URN in an interview.